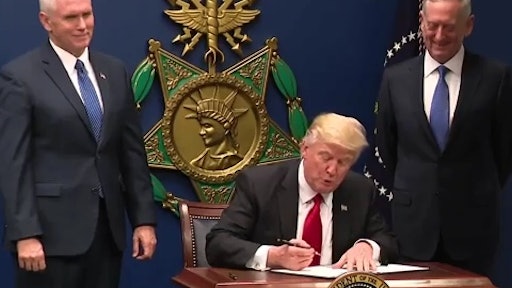 Donald Trump signs his first executive order on immigration at the Pentagon, in front of an image of America’s highest award for valor, the Medal of Honor. Writing a replacement for that court-challenged order have consumed Trump-staff capacity, contributing to the administration signaling delay until 2018 of fleshing out its swiftly shrinking infrastructure promises. The lure of using the spending bill against Congressional Democrats in the mid-term elections is also likely to be playing a role. Construction stocks such as Caterpillar, U.S. Steel and Martin Marietta took a hit on the news.

The Trump administration could have too much on its plate this year and might not have time to act on its much-touted, $1 trillion infrastructure plan until 2018.

Trump's staffers and agency heads are currently engaged with issues of immigration, healthcare, tax reform and battles over the debt ceiling.

Delaying infrastructure until next year could also be part of a Republican strategy to reel in Democrats facing midterm re-election who might hesitate to push back against projects that could bring spending to their districts.

BusinessInsider.com suggests the 2018 timeline makes sense, given what Treasury Secretary Steven Mnuchin told CNBC on Thursday — that the Trump team doesn't expect serious economic growth until "towards the end of next year." BusinessInsider.com also points out that Trump's $1 trillion infrastructure promise was pared down to $550 billion after the election, and that the the Trump team has subsequently prioritized roughly $137 billion in projects.

News of the potential delay hurt construction-related stocks such as Caterpillar, U.S. Steel, and Martin Marietta; stocks that got post-election boosts on the hopes of increased infrastructure spending.

See also: Trump Infrastructure Plan Could Be Put Off Until 2018

Reasons to Be Positive Despite 2017's Federal Infrastructure Spending Uncertainty