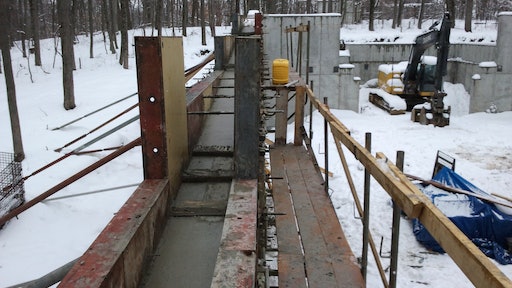 Question:  During a winter placement a couple of weeks ago, freezing temperatures were forecast so we added 2% calcium chloride to the mixture at the batch plant. It was very difficult for our crews to pour and put extreme pressure on the conveyor, the workers and the ready mix company. We had additional labor on the job, and two vibrators, and still ended up with honeycomb in a couple of spots. We know its use is common but we are leery of its use now.

Answer:  One of the most common problems in the use of Calcium Chloride (CaCl2) is the starting temperature point of the concrete batch. Early in the day is readily known as the best time to place concrete during cold weather. You gain the added benefit of the entire day’s solar exposure to bring extra energy to the concrete mass as well as having the highest likelihood of maximum temperatures for the day. However, early in the morning, the aggregate, cement and water temperatures at the plant are at their highest.

Assuming a target batch temperature of say 85 degrees F, adding the water-soluble calcium chloride to the mix immediately kicks the accelerator into action. The mix is then loaded into the drum and transported to the site. Drive times in most markets today are not uncommon between 30 to 60 minutes and at those temperatures, the concrete will begin rapidly hydrating. During this initial start of hydration, significant moisture is consumed resulting in a placement slump far below the expectation of the team. Knowing that water beyond the designed w/cm cannot be added, this leaves the contractor with few options and the result can often times be the honeycombing and very challenging placement efforts you have described.

One of the best things to consider then is the jobsite addition of the calcium chloride. This product must be converted from its bulk flake to water-soluble in buckets before addition to the mix and this can be planned easily at the site. Once added and mixed thoroughly through several resolutions of the drum, the concrete can be placed at a slump much closer to anticipated and the result will be far less risk of a stiff mix and resulting aesthetic imperfections.

Dennis Purinton of Purinton Builders (East Granby, Conn.) noted that contractors need to be proactive and not reactive on this topic and  evaluate the performance of your current mixes. He recommends  purchasing a maturity meter system as it is the fastest and most effective way to evaluate. If you do find a drop in performance due to lower temperatures, be sure to make small changes and only change one thing at a time.

Another common directive to this issue is to abstain from using calcium chloride. While it is certainly stated in both ACI 318 and ACI 332 that calcium chloride is not to be used for structurally reinforced concrete that is not dry in service, its use in all other concrete applications is certainly permitted. The alternative would be a non-chloride accelerator (NCA) or a combination of higher strength mixes with Type III cement. Caution needs to be applied to both of these selections as there is research out there suggesting much lower hydration temperatures for NCAs than anticipated and Type III comes with both availability and use problems of its own.

The best solution is to know your admixtures, develop a good relationship with your selected producer and plan the timing of the products to maximize their performance and prevent adverse problems.

Ed. Note: For more information on this topic, contact Jim Baty at jbaty@cfawalls.org. Purinton also will be speaking about this topic at the CFA Convention, to be held July 31 - Aug. 2 in Sandusky, Ohio. Find out more at www.cfawalls.org.