In 2013, construction equipment represented 9.5% of equipment financing new business volume reported by ELFA member companies, up from 8.5% in 2012 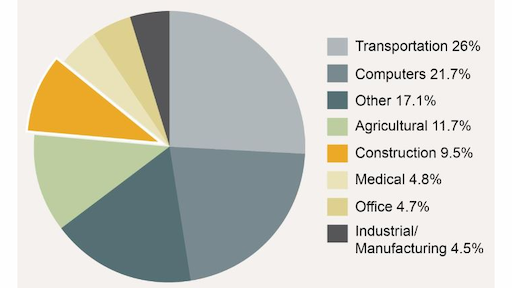 Below are key findings for the construction industry from ELFA's SEFA and related resources.

According to the 2014 “What’s Hot/What’s Not” Equipment Leasing Trends Survey released by the Independent Equipment Company in cooperation with ELFA to measure industry perceptions of equipment types:

Investment in equipment and software

Every year U.S. businesses, nonprofits and government agencies spend in excess of $1.4 trillion in capital goods or fixed business investment (including software/excluding real estate). According to the Equipment Leasing & Finance Foundation’s 2013 State of the Equipment Finance Industry Report:

According to the U.S. Census Bureau:

According to the Wells Fargo 2014 Construction Industry Forecast:

According to the June 2014 Rouse Rental Report:

Managing risk and insurance is always in the top three expenses for a contractor and is much more than just purchasing an insurance policy. The deceiving part about purchasing insurance is that the only visible number is the premium.
Elizabeth K. Schneckenburger
August 20, 2015
Follow Us