'The weakening of economies in Europe, Japan and elsewhere has reduced demand for construction materials on a global basis' 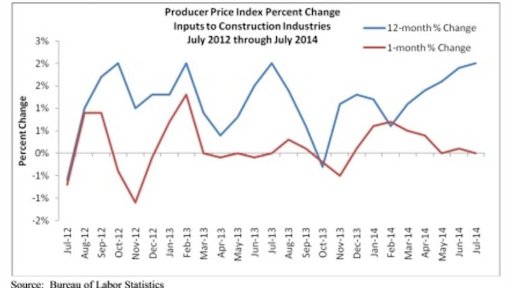 Overall, construction materials prices inched higher in July and are up 2% year over year.

"The weakening of economies in Europe, Japan and elsewhere has reduced demand for construction materials on a global basis, helping to offset the impact of geopolitical strife in commodity-rich areas," said Associated Builders and Contractors Chief Economist Anirban Basu. "Oil and other commodity prices have actually been falling in recent days as additional bad economic news emerges from Germany, France, Italy and other major economies."

"While the harsh winter helped to lift energy prices during the initial quarter of 2014, a cool and pleasant summer has helped to usher them in the opposite direction," said Basu. "From a monetary policy perspective, the 1.7 percent year-over-year gain in overall final demand prices bodes well for those who would prefer to see the Federal Reserve continue its soft-on-inflation policymaking. During previous months, final demand price gains were in the range of 2 percent on a year-over-year basis. The July data will help to assuage inflation-related fears."

Five of the 11 key construction inputs did not experience price increases for the month.