All three indices measured by ABC's Construction Confidence Index increased in the first half of 2014; nonresidential construction recovery positioned to continue into year ahead 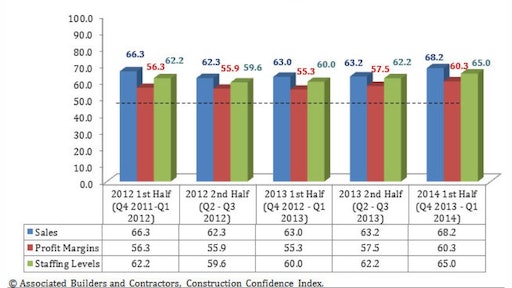 Nonresidential construction confidence has been up for the past 18 months.

The Associated Builders and Contractors (ABC) Construction Confidence Index (CCI) increased across all three indices in the first half of 2014. The CCI reflects construction industry prospects using three measured categories – revenues, profit margins and hiring. Each index now stands at a post-recession high, implying that nonresidential construction's recovery, already robust, is positioned to continue into the year ahead.

During the first six months of 2014 (readings above 50 indicate growth):

"A number of factors are aligning to boost the performance of the nonresidential construction industry and the confidence of construction business owners," said ABC Chief Economist Anirban Basu. "August notwithstanding, employment growth has been solid, including in segments such as professional/business services and leisure/hospitality, which in turn is helping to trigger new construction in office and lodging segments. The industry's confidence has also been boosted by low interest rates, easing credit conditions for developers, expanded consumer spending and stabilizing state and local government revenues, which in many cases is attributable to a combination of higher retail sales and property tax revenue.

"While industry momentum has improved with the weather and the current survey indicates that the pace of progress will continue to accelerate into 2015, do not expect a boom," cautioned Basu. "The bulk of respondents believe that improvement in sales, profit margins and staffing levels will be gradual moving forward. Moreover, while nearly three-quarters of respondents expect sales volume to increase during the months ahead, fewer than half expect an improvement in profit margins, indicating that the marketplace remains unusually competitive from a pricing perspective."

*CCI is a diffusion index. Readings above 50 indicate growth, while readings below 50 are unfavorable. The following chart reflects the distribution of responses to ABC's most recent surveys.