Construction backlog was at 8.8 months during Q3 2014, which is 6.9% higher than last year and indicates 2015 will be a strong year of recovery for nonresidential construction 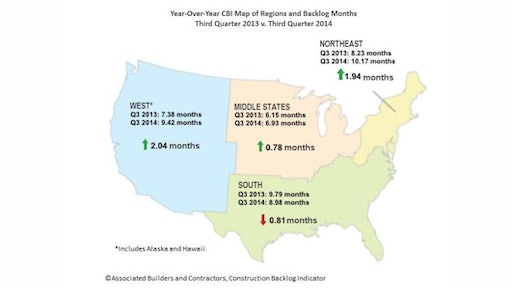 Average backlog is at or nearly at a record high in three regions, the Northeast, Middle States, and the West.

"Every region of the nation experienced expanding backlog during the third quarter and so did every industry segment," said ABC Chief Economist Anirban Basu. "Recent data regarding nonresidential construction and employment has shown only sporadic gains, which is consistent with the less optimistic backlog readings registered earlier this year. But the last two quarters tell a positive story that the average nonresidential contractor in America is positioned to get busier.

"Given the recent acceleration in job growth, the improvement in the quality of jobs being added, and a still-accommodative Federal Reserve, the U.S. macroeconomic outlook for 2015 represents the most upbeat assessment of economic prospects during the post-recession period," said Basu. "The nation has added more than 2.6 million jobs over the past 12 months and, for the first time in six years, the nation's unemployment rate has dipped below 6 percent. While there are a number of headwinds, including a still-shaky global economy and a meaningful dip in oil prices that is likely to impact both oil production and related capital spending, most leading indicators remain positive. Lending conditions appear to be easing and a booming stock market has generated both positive wealth and confidence effects."

Average backlog increased in all regions. The technology boom in Boston’s suburbs, the positive impacts of Marcellus Shale-derived activities and a resurgent Wall Street are all contributing. A recent uptick in subcontractor failure may also be contributing to rising backlog among industry survivors. Backlog remains lowest in the Middle States, in part because of still-sluggish conditions in Illinois. However, conditions continue to improve in Ohio and Michigan.

Backlog expanded among all industry segments during the third quarter and all categories have also experienced year-over-year increases. Surprisingly, average backlog climbed most profoundly during the past quarter in the infrastructure category. A number of states, including Maryland, have significantly increased tolls and taxes in order to fund transportation infrastructure, which may be supporting lengthier backlog. Backlog also climbed meaningfully in the heavy industrial category, which is consistent with the recent resurgence of industrial production as well as the ongoing expansion of energy production and distribution-related investment.

The nonresidential construction recovery has now begun to encompass smaller firms. The third quarter of 2014 represents the first time firms with annual revenues below $30 million have reported average backlog above eight months in the history of the CBI series. At 8.25 months, the small firm CBI is now nearly a month longer than it was one year ago. Large firms continue to report the lengthiest backlog, which comes as little surprise since these firms are most closely associated with the largest projects. Average backlog slipped a bit for firms between $30 million and $100 million in annual revenue, perhaps because larger firms have become increasingly willing to bid on smaller projects.