Investment in Construction Machinery Expected to Moderate Over Next Two Quarters 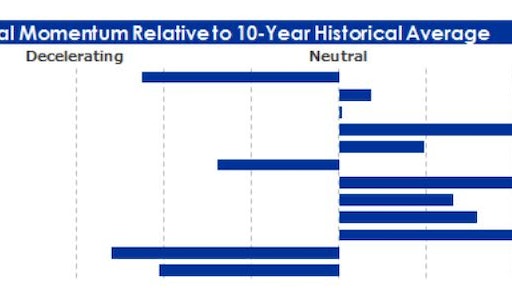 This chart summarizes the current values of each of the 12 Equipment & Software Investment Momentum Indices relative to the index values for each quarter over the last 10 years.

Investment in equipment and software is expected to grow 6 percent in 2015, driven by a steadily improving economy, according to the Annual 2015 Equipment Leasing & Finance U.S. Economic Outlook from the Equipment Leasing & Finance Foundation (Foundation). Overall in 2015, the outlook for 12 individual equipment and software verticals tracked in the report is mixed, with some sectors outperforming others. The Foundation’s report, which is focused on the $903 billion equipment leasing and finance industry, forecasts 2015 equipment investment and capital spending in the United States and evaluates the effects of various industry and external factors likely to affect growth over the next 12 months. The report will be updated quarterly throughout 2015.

William G. Sutton, CAE, President of the Foundation and President and CEO of the Equipment Leasing and Finance Association, said, “The Association’s Monthly Leasing and Finance Index reports new business volume is up, the Foundation’s Monthly Confidence Index shows industry confidence is solidly positive, and this Outlook for 2015 projects continued steady growth in equipment and software investment. Equipment investment has been relatively modest in recent years but picked up in 2014 and now seems poised to maintain this momentum into 2015. Overall, these trends portend a positive result for the equipment finance industry and U.S. economy.”

The U.S. economy is poised to have a breakout year in 2015, with growth expected to top 3 percent.  Key “bright spots” that bode well for above-average growth include a rapidly improving labor market, increased access to credit, lower oil prices and fiscal healing.  Meanwhile “wild cards” that could hinder growth include potential political gridlock, weakness in the global economy and geopolitical risks.

The steadily improving economy will likely drive solid equipment and software investment growth in 2015.  Continued improvement in the economy should gradually loosen credit constraints and increase credit demand as businesses and households gain more confidence in the economy.

Equipment and software investment increased 9.3 percent in Q3 of 2014 after expanding 9.6 percent in Q2.  Although these growth rates are unlikely to be sustained in the coming months, growth is still expected to be 5.9 percent in 2014 and remain relatively strong at 6 percent in 2015.