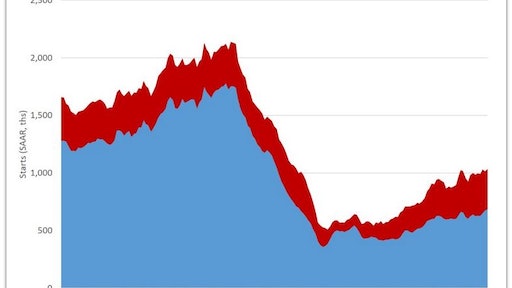 Following an upwardly revised rate last month, housing starts in November slipped 1.6 percent to a seasonally adjusted annual rate of 1.028 million units, according to newly released figures from the U.S. Department of Housing and Urban Development and the U.S. Census Bureau. Three-month moving averages for total and single-family production were at their highest levels since the Great Recession.

“These numbers are in line with our latest surveys, which show that single-family builders are confident that the market is gradually recovering,” said Kevin Kelly, chairman of the National Association of Home Builders (NAHB) and a home builder and developer from Wilmington, Del.

“Over the course of the year, the number of houses under construction has been on an upward trajectory, signaling that housing is moving forward,” said NAHB Chief Economist David Crowe. “With strong demand, affordable home prices and favorable interest rates, we should see housing production continue to grow into 2015.”

Single-family housing starts were down 5.4 percent to a seasonally adjusted annual rate of 677,000 units in November, while multifamily production rose 6.7 percent to 351,000 units.

Regionally in November, combined housing production increased in the Northeast, Midwest and West, with respective gains of 8.7 percent, 14.4 percent and 28.1 percent. Total production dropped in the South by 19.5 percent.

Regionally, the Northeast posted an overall permit gain of 27.4 percent. The Midwest, South and West registered respective losses of 7.3 percent, 10 percent and 5.6 percent.

Builder Confidence Down Slightly in December