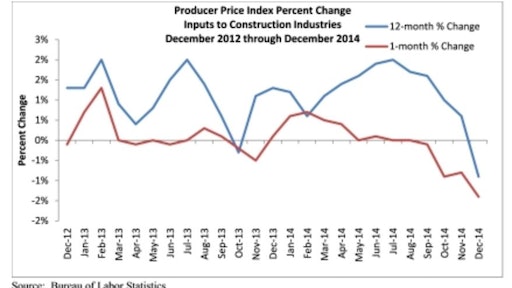 Construction input prices dipped 1.4 percent during the final month of 2014 and are down nearly 1 percent on a year-over-year basis, according to the January 15 producer price index release from the U.S. Department of Labor. Inputs to nonresidential construction fell even farther, down 1.7 percent for the month and 1.9 percent year over year. December's report marks the sharpest decline in input prices since late 2008 during the global financial crisis and the fifth consecutive month construction materials prices have failed to rise.

"Without question, financial markets have been unnerved by the recent declines in oil, copper and other commodity prices, although that jitteriness does not necessarily imply a serious economic problem in America," said Associated Builders and Contractors Chief Economist Anirban Basu. "The fact is the U.S. economy has performed handsomely over the past nine months, according to most metrics, and conventional wisdom suggests that it can continue to expand at or above trend rates of growth despite economic weakening in Europe, China and elsewhere. This is further evidenced by the World Bank's recent downgrade of its forecasts for global growth in 2015 and 2016, while it upgraded its outlook for the United States.

"Overall, the view that U.S. domestic demand for construction services and most other services continues to expand is consistent with the fact that some domestically produced and consumed materials actually registered price increases last month," said Basu. "Note that concrete prices are up by 5 percent on a year-over-year basis while natural gas prices are up by 10 percent."

Seven of the 11 key construction inputs did not experience price increases for the month.