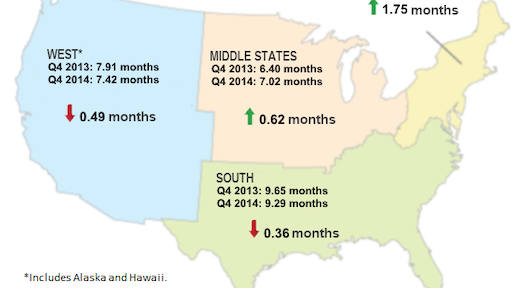 Average backlog in the South is back above 9 months for the first time since the Q1 2014 while the Northeast and the Middle States registered levels of average backlog unseen during the history of the CBI survey.

According to Associated Builders and Contractors (ABC), the Construction Backlog Indicator (CBI) for the fourth quarter of 2014 declined 0.1 months, or 1 percent.  Despite the quarter-over-quarter decline, backlog ended the year at 8.7 months, which is still 4.4 percent higher than one year ago.

"There are a number of factors that are likely to be beneficial to nonresidential contractors in 2015," said Basu. "First, although interest rates were expected to rise after the Federal Reserve ended its third round of quantitative easing, they have actually been trending lower — due to factors such as falling interest rates abroad and a strengthening U.S. dollar — which helps contractors with construction volume and borrowing costs. Second, materials prices have continued to fall — particularly inputs related to the price of oil, iron ore and copper. This also makes it more likely that construction projects will move forward and helps boost profit margins."