Nonresidential’s 2% fall in January is its largest spending setback since January 2014, but the sector remains 4.8% higher than one year ago 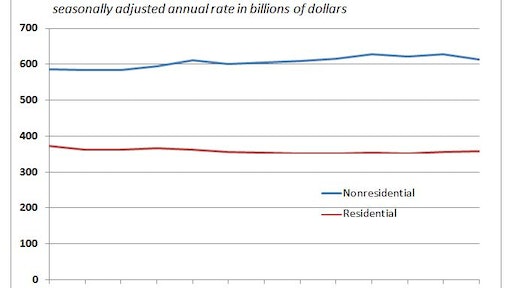 "Interpreting January construction statistics is always tricky because the seasonal adjustments can never precisely reflect the impact of any given winter or weather system," said Associated Builders and Contractors Chief Economist Anirban Basu. "New England, among other places, was hit heavily by snow in January and this could explain the monthly decline in nonresidential construction spending.

"Additionally, nonresidential construction spending enjoyed positive momentum through the end of 2014 and, until January, had registered spending growth in five of the previous six months," Basu said. "It is also possible that the West Coast port slowdown impacted construction volumes, including by reducing material availability."

Three of 16 nonresidential construction subsectors posted increases in spending in January on a monthly basis:

Total U.S. construction spending in January was estimated at a seasonally adjusted annual rate of $971.4 billion, 1.1% below the revised December estimate of $982.0 billion. The January figure is 1.8% above January 2014's $954.6 billion.