More than 30% plunge in Midwestern single-family starts connected to weather; ‘current pace of home construction remains strong and growth should continue in 2015’ 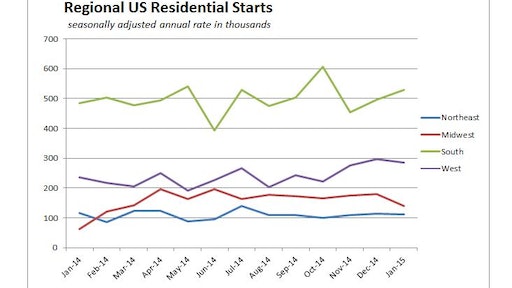 In addition to the Midwest’s 22.2% starts plunge, combined single- and multifamily housing production increased 6.5% in the South, fell 3.5% in the Northeast and fell 3.4% in the West.

Nationwide housing starts fell 2% to a seasonally adjusted annual rate of 1.065 million units in January, according to newly released data from the U.S. Commerce Department. This drop was mainly due to a 22.2% decrease in total construction starts in the Midwest.

“These numbers are consistent with our recent surveys and are primarily due to severe weather hitting the Midwest and other parts of the country,” said NAHB Chairman Tom Woods, a home builder from Blue Springs, Mo.

“After a strong single-family report in December, it is not surprising to see some pull back in January,” said NAHB Chief Economist David Crowe. “With continued job creation and a growing economy, single-family production should make gains in the year ahead.”

In addition to the Midwest’s 22.2% plunge, combined single- and multifamily housing production in the country’s regions:

Regionally, the change in permit issuance was mixed in January:

Takeuchi-US is preparing for the opening of the new Takeuchi Training Center with the addition of Ashleigh Gross as a technical trainer and Megan McFarlane as training center coordinator.
Takeuchi-US
Mar 4th, 2021

CPWR offers suggestions to improve ventilation, and cut COVID-19 exposure risks, on enclosed construction sites where HVAC systems are not in operation.
CPWR -- The Center for Construction Research and Training
Feb 19th, 2021
Follow Us