January Dodge Momentum Index Falls after Jump at End of 2014 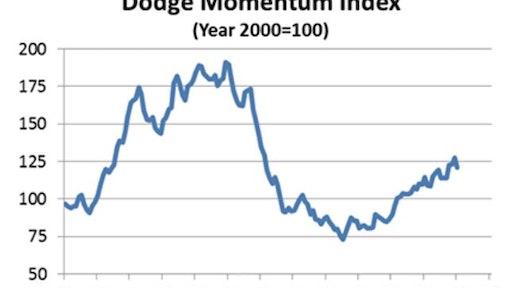 Compared to the same month a year ago, January’s Momentum Index was up 5.8%.

The Dodge Momentum Index fell 4.8 percent in January to 121.1 (2000=100), down from a revised 127.2 in December, according to Dodge Data & Analytics. The Momentum Index is a monthly measure of the first (or initial) report for nonresidential building projects in planning, which have been shown to lead construction spending for nonresidential buildings by a full year. During the final three months of 2014 the Momentum Index had jumped 11.7 percent, so while January’s 4.8 percent drop showed decreased activity relative to December, it was still in line with the moderate if at times hesitant upward trend that’s been present over the past three years. Compared to the same month a year ago, January’s Momentum Index was up 5.8 percent.

January’s decline for the Momentum Index relative to December was the result of decreased planning activity in both the commercial and institutional sectors. The institutional sector fell 10.2 percent, while the commercial sector edged down 0.4 percent. There were three commercial building projects exceeding $100 million that entered planning during the latest month – the $150 million Park District Office Building in Dallas, a $149 million office building in New York and the $100 million Union Place mixed-use development in Mahopac, N.Y. There were four institutional projects over $100 million that entered planning during January, notably the $210 million UCF Downtown Campus (Creative Village) in Orlando.