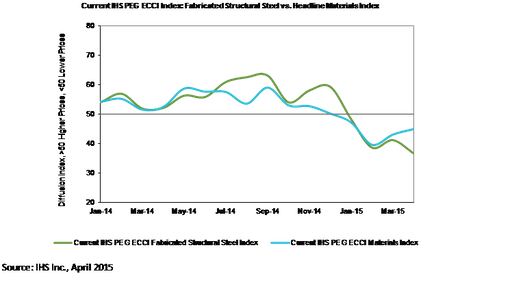 Construction costs fell again in April, according to IHS and the Procurement Executives Group (PEG). The headline current IHS PEG Engineering and Construction Cost Index (ECCI) registered 46.2 in April, up from March, but still below a neutral reading. The headline index has not indicated rising costs since December 2014.

“Globally, the steel industry continues to suffer from bloated capacity, weak profit growth, and lackluster demand,” said John Anton, director of the steel service at IHS. “Over the past decade, the rapid rise of the Chinese steel industry put huge pressures on iron ore miners and as demand stayed ahead of capacity, prices soared. Ore companies responded with massive projects to expand capacity, which is now coming online – only demand hasn’t kept the same momentum. Supply is now far ahead of demand and lower iron ore prices are here to stay.

“It generally takes about three months for falling steel prices to flow through to pipe and tube, and six months to flow into downstream products such as valves, fittings, and fabrications,” Anton added.

Despite serving different end markets, the state of iron ore bears a striking resemblance to the fallout in crude oil prices over the past year as both have been rocked by oversupply. Each is dominated by major players now battling for market share rather than profits. Both markets have also seen prices halve since June. The similarities end here, however. Oil markets have found temporary stability from cuts in investment spending and the expected slowdown of U.S. production growth.

In contrast, iron ore prices plunged over the first half of the month as markets saw no sign that production might be reined in. Indeed, China added to the industry's problems earlier in April by taking steps to support its domestic industry, three-quarters of which is losing money according to its own Metallurgical Mines Association. While prices in both markets showed signs of stabilization as April came to a close, more discipline will be needed on the supply front for prices to stage a sustained recovery.

In the survey comments, the world’s largest engineering, procurement and construction firms continue to reassess previously bullish sentiment regarding investments in hydrocarbon projects over 2015-2016.

“New capital projects – particularly in the oil and gas sector – are in a holding pattern, with some adopting a ‘wait and see’ approach,” said Mark Eisinger, senior economist, IHS. “The capex environment has yet to thaw despite some stabilization in oil prices over the past month.”

The current subcontractor labor index eased further to 49.1 in April, a touch higher than the March reading. The majority of regions registered flat labor costs in April, with Western Canada as the only exception, posting a slight easing. For a third month running, the U.S. South did not register higher month-on-month labor costs. Nevertheless, tightness in skilled labor markets was still reported in the Gulf Coast.

The six-month headline expectations index dropped to 44.6 in April, following the 45.9 reading in March, well below the historical average. Since the beginning of 2015, the forward looking index has consistently implied falling price expectations over the six month horizon. The materials/equipment index rebounded slightly after March’s record low, though ten of twelve individual components still showed falling price expectations. Ready-mix concrete remains the only subcomponent above the neutral mark. Meanwhile, for the first time in survey history, expectations for subcontractor labor were below the neutral mark, falling to 47.4 in April from 55.2 last month. Expectations fell across the regions, with the U.S. South as the only key exception.

To learn more about the new IHS PEG Engineering and Construction Cost Index or to obtain the latest published insight, please visit: www.ihs.com/ecci.