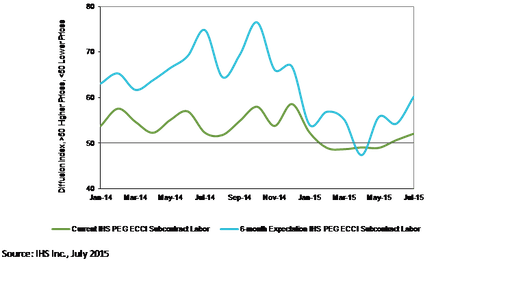 Materials and equipment prices continue to drag down overall construction costs, according to IHS and the Procurement Executives Group (PEG). The headline current IHS PEG Engineering and Construction Cost Index (ECCI) registered 48.4 in July, up from June’s reading of 47.4, but below the neutral mark. The headline index has not indicated rising costs since December 2014.

The current materials/equipment index registered 47.4 in July, up from 46.0 in June. The pricing environment appears to be stabilizing, a change from the weakness seen in the first half of the year, but remains soft. The underlying detail shows falling prices for half of the 12 individual components tracked by the survey. Prices for copper-based wire and cable, carbon steel pipe, and fabricated structural steel registered the weakest performance. Six components did show higher prices in July, led by turbines, which overtook ready-mix concrete prices as the strongest price performer. Ready-mix concrete prices have held the top spot since January.

“Material and equipment costs remain subdued, although conditions appear to have firmed somewhat since spring,” according to John Mothersole, research director at IHS. “With the exception of cement, material prices continue to be soft. In contrast, equipment prices started to tick higher in July, with the market for turbines showing some tightness.”

The current subcontractor labor index registered 52.1 in July, higher than June’s reading of 50.7; moving the index solidly above the neutral mark. The majority of regions reported rising cost in July, with the exception of the U.S. Midwest. Prices for subcontract labor in the U.S. Midwest region are now below the neutral mark for the first time since data collection began in 2012. The U.S. South continues to be the strongest region with reported tightness in skilled labor markets due to petrochemical and LNG projects in the region.

“U.S. labor markets continue to improve and employers should expect to pay more this year,” said Laura Hodges, director at IHS. “Employers with a significant percentage of skilled workers are particularly vulnerable to higher wages this year. Given their reliance on skilled trades, engineering, procurement and construction (EPCs) firms are already experiencing stronger wage growth for its subcontract workers.”

The six month headline expectations index increased in July, rising to 54.9, and continuing its upward trek from a record low of 44.6 in April. The materials/equipment index moved slightly higher to 52.6 in July from 52.5 in June. Eight individual components registered higher price expectations, led by ready-mix concrete. The headline expectations index moved higher in July primarily due to higher expectations for subcontractor labor, which registered 60.2, its strongest level since December.  All regions are now expected to have rising costs in six months, including Western Canada, which has been the most bearish region since oil prices began dropping late last year.

To learn more about the new IHS PEG Engineering and Construction Cost Index or to obtain the latest published insight, please click here