Data continues to hint at broad weakness in aggregate demand 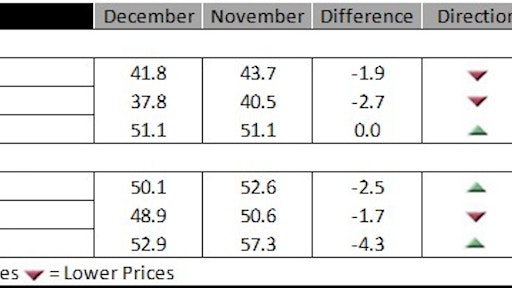 Current construction costs fell again in December, according to IHS Inc. and the Procurement Executives Group (PEG). The headline current IHS PEG Engineering and Construction Cost Index (ECCI) registered 41.8 this month, down from 43.7 in November. Despite the slight ups and downs, the headline index remained consistently below the neutral mark in 2015, indicating that costs have declined throughout the year. In addition, December's index figure marked the lowest reading for 2015.

The current materials/equipment price index slowed to 37.8, down from 40.5 in November, the lowest level since the survey began four years ago. All underlying material and equipment components showed falling prices except ready-mix concrete, which showed neutral prices. Copper-based wire and cable registered the highest drop compared to last month, moving from 42.5 in November to 27.5 in December. Transformers, fabricated structural steel and exchangers price indexes also retreated relative to November.

“The latest data for the PEG indexes highlight the general softness in the pricing environment and, more particularly, the filtering through of the sharp and continuing drop in commodity prices that began back in the summer of 2014, said John Mothersole, director of research at IHS Pricing and Purchasing.  “While declines in certain material categories, such as wire and cable, stand out at the moment, the pervasive weakness in the data hints at a broad weakness in aggregate demand.

The current subcontractor labor index remained unchanged in December at 51.1. The sub index recorded its lowest level ever in October, and since has remained just above neutral.  In the United States, most geographies reported neutral price movements for subcontractor labor, with the exception of US Northeast, where prices increased with an index reading of 55.0. In both Eastern and Western Canada, subcontractor labor hit the neutral mark.

The six-month headline expectations index eased to 50.1 in December, reverting back to a weak but positive outlook. The materials/equipment index fell to 48.9, from 50.6 in November. Only one third of the materials and equipment categories came in above the neutral mark, with ready-mix concrete registering the highest price expectations. For future subcontractor labor costs, expectations remained above the neutral mark at 52.9. Subcontractor labor cost expectations fell in Western United States and Eastern Canada. They strengthened in Western Canada and the majority of the US, with the US South posting the highest price expectations.

The headline IHS PEG Engineering and Construction Cost Index (ECCI) finished the year on a weak note, reflecting the deteriorating price environment of 2015. In 2014, steel-related products such as alloy steel pipe and fabricated structural steel recorded widespread price increases. This year the price indexes for the same materials as well as carbon steel pipe showed 12 months of falling prices.  The weak price environment has also been widespread, with materials such as transformers, electrical equipment and copper-based wire and cable registering at least nine months of falling prices. Lower Chinese demand for commodities and reduced investment from the oil and gas industry throughout 2015 have kept the cost environment weak. Ready-mix concrete was the only material that recorded real pricing strength during the year, tied mainly to strong demand in the Southern US and tight supplies of cement throughout the country.

Even With Higher Labor Costs, the Pricing Environment for Construction Remains Weak