Texas led the 45 states that added the most construction jobs between February 2014 and February 2015; Mississippi led the four states that lost jobs, and employment was unchanged in Delaware 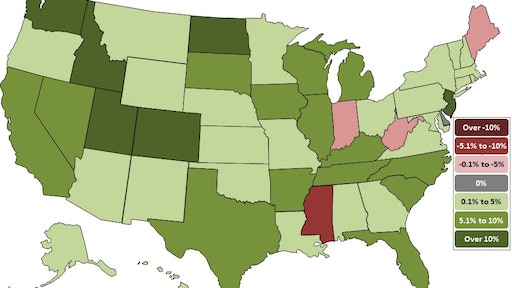 Thirty-three states added construction jobs between January and February and 17 states lost jobs for the month. The map above shows employment data by state.

Construction firms added jobs in 45 states and the District of Columbia between February 2014 and February 2015 while construction employment increased in 33 states between January and February, according to an analysis today of Labor Department data by the Associated General Contractors of America. Association officials noted that growing labor, funding and regulatory challenges may impact future jobs gains, however.

“Construction employment continues to recover in many parts of the country even as some markets have a hard time stabilizing,” said Ken Simonson, the association’s chief economist. “States like Nevada and Mississippi continue to experience significant monthly swings in construction employment as the recovery struggles to take hold in certain hard hit markets.”

States Where Construction is Growing, Struggling Years After the Recession


Four states shed construction jobs during the past 12 months while construction employment was unchanged in Delaware. Mississippi lost the highest percentage and total number of jobs (-4,400 jobs, -8.7 percent). The other states that lost construction jobs for the year were:


Seventeen states and the District of Columbia lost construction jobs for the month:


Association officials said growing labor, regulatory and funding challenges could have a significant impact on the construction industry in the near future. Growing shortages of qualified construction workers are causing challenges for many employers. Meanwhile, flawed new regulatory measures and uncertainty about the future of federal funding for transportation and other infrastructure threaten the sector’s recovery.

“Even as the construction industry continues to expand in most places, the sector remains vulnerable to the growing threats of labor shortages, funding challenges and expanding regulatory burdens,” said Stephen E. Sandherr, the association’s chief executive officer.

View the state employment data by rank, state and map.