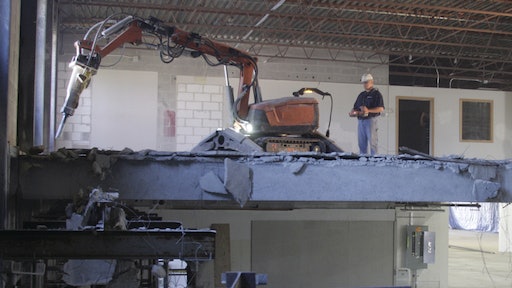 Husqvarna is moving in the direction of selling robots to demolish concrete, separating workers from exposure to vibration issues. Workers stand away from the machine and use joysticks to control the robot's movement.

You probably don’t realize there’s much to be concerned about regarding the impact and vibration from tools and equipment, but there is.

Almost every tool and piece of construction equipment vibrates to some extent, some much more than others. Tools include electric, hydraulic, pneumatic tools and internal combustion engine equipment. Hand-guided tools include angle grinders, saws (for wood, steel and concrete), reciprocating saws, impact drivers, hammer drills, chipping hammers, jack hammers, chain saws, compactors and concrete vibrators. Operators of large construction equipment, truck drivers and even helicopter pilots are at risk. Thomas McDowell, a research engineer for the National Institute for Occupational Safety and Health (NIOSH) of the Centers for Disease Control (CDC), Morgantown, W.V., says damage to a person’s body is primarily dependent on three factors; the magnitude of the acceleration, the frequency spectra of the vibration generated by the tool and the length of worker exposure time. Other important factors include the environment a person is working in, their posture, their physical condition and potentially their genetic background.

If you use tools with higher levels of vibration or impact over time, permanent damage to your hands, arms, back, legs and joints can result. Here’s what you should be aware of and how equipment manufacturers are trying to make their products safer to use.

How our bodies react to vibration

Long-term exposure to hand-transmitted vibration from using powered hand tools can lead to a disorder known as hand-arm vibration syndrome. David Rempel, a Professor of Occupational Medicine at the University of California, San Francisco, and Professor of Engineering at UC Berkeley, is doing research on the effects of impact and vibration to hands and arms. He says this causes damage to capillary blood vessels and nerves which can be serious and irreversible.

Prolonged vibration causes the inner lining endothelial cells to multiply and not function correctly, causing blood to leak through vessel walls. In addition, Kristine Krajnak, leader of the Biological Assessment of Mechanical Exposures team for NIOSH, says their studies show exposure to vibration can result in edema, inflammation and vascular dysfunction. These changes eventually lead to a thickening of blood vessel walls, vascular constriction and a reduction in blood flow. The risk of vascular dysfunction escalates for people working in cold climates because cold causes blood vessels to constrict, resulting in a reduction in blood flow.

Nerve damage also results from prolonged exposure to vibration. Rempel says the myelin sheath surrounding nerves (think of a nerve as an electrical wire and the myelin sheath as the plastic insulation surrounding it) gets destroyed, exposing the nerve. Nerve fibers also retract, disconnecting from the muscle fiber they activate, resulting in permanent damage.

Beyond hands and arms, your whole body is affected by exposure to vibration and impact. It travels through hands and arms to the rest your body — joints, neck and back problems can develop when tendons, ligaments, bone and cartilage are damaged.

Mitch Burdick, the Product Manager for Concrete Tools at Bosch Tools, says regulations and guidelines for establishing vibration limits for power tools comes from Europe. “There are no current regulations for tool manufacturing or use limitations in the U.S.,” he adds. Tool companies serving both European and U.S. markets manufacture their products to meet European standards, so U.S. markets benefit from European requirements. The European Committee for Standardization (CEN) (Comité Européen de Normalisation ) is the organization which establishes frequency and time-weighted action and exposure limit values for hand-arm-vibrations and whole-body-vibrations on the basis of a standardized eight-hour work day. The International Organization for Standardization (ISO) sets the guidelines for tool manufacturers who test their tools according to established protocols and publish the vibration acceleration values of their tools (expressed in meters per second squared).

In the United States there are two voluntary consensus standards, the American National Standards Institute (ANSI), which has established a voluntary consensus standard (ANSI S2.70-2006), and the American Conference of Governmental Hygienists (ACGIH). They established Hand Arm Vibration and Whole Body Vibration Threshold Limit Values. These guidelines recommend methods for the measurement, data analysis, vibration and health risk assessments, and reporting of human exposures to hand-transmitted vibration. The guidelines echo the action and exposure limit values prescribed in the European Union (EU) directive established by the CEN. But with no enforceable standard in the United States to regulate tool makers, every manufacturer is free to define their tools’ vibration levels as they wish. Burdick thinks the industry would benefit if all manufacturers could agree on the same measurement protocols, such as those established by the ISO.

When you shop for a power tool, it’s difficult to know which manufacturer makes the tool with the least amount of vibration acceleration. You won’t find these numbers printed on the box as they are in Europe. Burdick says instead buyers must look at marketing claims about how they reduce vibration and impact.

In the United States you generally aren’t informed about safe exposure limits for operating tools with different vibration accelerations.

Workers shouldn’t use jackhammers to break concrete or rock for extended periods of time without taking breaks. But Richard Elliott, Product Development Specialist for Atlas Copco, says they are doing their best to minimize the risk. They developed air cushions for the top and bottom of hammer piston strokes to reduce vibration, and they sell optional handles which are linked to the tool by means of springs that are adjusted to decrease the vibration impact to the operator's hands and arms by as much as 75 percent when used properly. Elliott adds that his company sells their products in Europe so they follow ISO standards and EU directives in the United States too.

Mark Michaels, the Director of Product Management for Husqvarna Construction Products, says they make both concrete saw and demolition robots for the concrete industry. “We are moving toward remote controls as a way to completely separate workers from vibration and impact,” he says. They sell breakers and crushers mounted on small track vehicles, allowing workers to stand away from the machine while operating a joystick controller. Their wall saws have remote controls too. Their walk-behind concrete saws and hand-held power cutter saws have less vibration because handles are separated from the crankcases.

The manufacturers of small hand tools such as angle grinders, reciprocating saws, hammer drills and chipping hammers also work to reduce vibration. Burdick says they do this by machining moving parts more precisely, introducing counter-weights to minimize impact on hands, improving overall performance and efficiency, and developing handles that are “de-coupled” from the tool. Reducing tool size and weight also helps. Rempel’s laboratory is developing a bench top method for measuring handle vibration for hammer drills.

Burdick points out that vibration is also caused by tool accessories. For instance, a hammer drill bit with two cutter heads vibrates more than a bit with four cutter heads. There are also differences between grinder bits — in-plane, well balanced ones run more smoothly.

Nobody wants to experience physical disability that exposure to vibration acceleration and constant impact can cause. Manufacturers don’t want to cause harm either. But in a very competitive industry, there’s a strong motivation to sell products at the right price and the voluntary guidelines offered by ANSI and ACGIH aren’t likely to be adopted by U.S. regulatory agencies anytime soon. Unfortunately, for now workers are put in the position of “let the user beware.”

In the meantime, research continues to understand how vibration and impact affect our physiology and what we can do to minimize the risk.