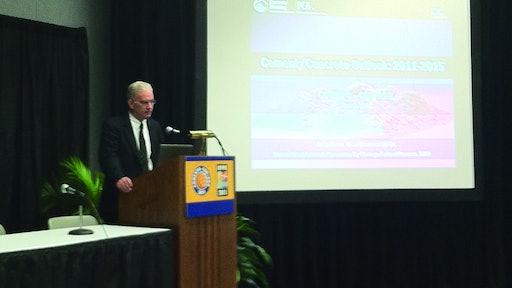 The Portland Cement Association (PCA) held a press conference at the 2011 CONEXPO-CON/AGG show in Las Vegas where PCA Chief Economist Ed Sullivan presented his economic forecast for cement consumption and the construction industry. Sullivan indicated he expects the construction economy to remain about the same — with only slight cement consumption increases — through 2012, with a strong recovery beginning in 2013 in the residential, non-residential and public sectors.

At one point, Sullivan likened the national economy to a wound. "The deeper the wound, the longer it takes to heal, and we suffered a deep wound," he said. "At the core of the healing is job creation." Sullivan added that job creation will spawn residential growth and lead to a recovery in state budget deficits.

Despite the wait the construction industry will need to endure before it starts seeing substantial uptick in its economy, Sullivan left the event on a few positive notes. "For every year we are depressed we are creating pent up demand. The pent up demand will materialize in 2013, 2014, 2015 and beyond," he said. Sullivan noted that U.S. population growth over the next 20 years will result in increased demand for more roads, homes, hospitals, schools and other public works. Additionally, as oil prices increase and oil refineries become more advanced, concrete will become a more cost-effective option for DOTs and municipalities, further contributing to an increase in overall cement consumption.

You can read Ed Sullivan's economic outlook "Concrete Outlook: Stuck in Neutral" from the January 2011 issue of Concrete Contractor magazine.