Even with broader economic recovery, construction is expected to remain at new floor levels and keep cement consumption flat for two years 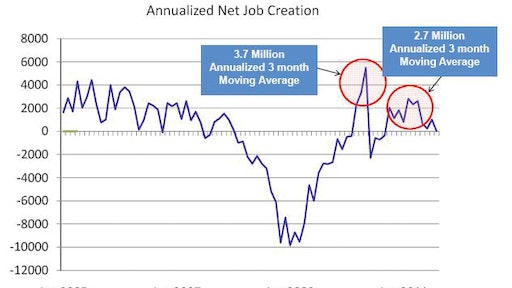 Job creation, a major factor in economic recovery, has weakened, with the US creating only 72,000 jobs monthly during the past six months, compared to 215,000 jobs per month during February-April.

Job creation is key to improving many economic indicators, and its reduction translates into a longer wait for the construction and cement recovery. Even with an economic recovery, construction levels will remain at new floor levels and lead to relatively flat cement consumption until 2014, according to the most recent economic forecast from the Portland Cement Association (PCA).

PCA revised its cement consumption forecast to increases of 1.1 percent in 2011, 0.5 percent in 2012 and 7.4 percent in 2013—roughly half of the previous forecast. According to the report, large structural issues exist in each construction sector that will slow recovery.

"The Great Recession was construction focused. Residential, nonresidential and state discretionary construction levels collapsed," Edward Sullivan, PCA chief economist said. "Despite economic growth, the residential sector, for example, will continue to be plagued by a large volume of foreclosures, tight lending standards and weak new home prices. I don't see a rebound in most of that market until 2014."

Recovery for the construction industry is tied to general economic growth and job creation. Job creation will reduce, and eventually eliminate, the adverse impacts of foreclosures, tight lending standards, commercial occupancy and leasing rates as well as the severity of state fiscal conditions. However, because the impediments to a construction recovery are so large, even if an acceleration in economic growth and job creation occurs on a sustained basis, the benefits will not materialize quickly.

According to Sullivan, nonresidential construction will also remain low until 2013, and lack of assured federal funding will drag down the public sector until 2014.