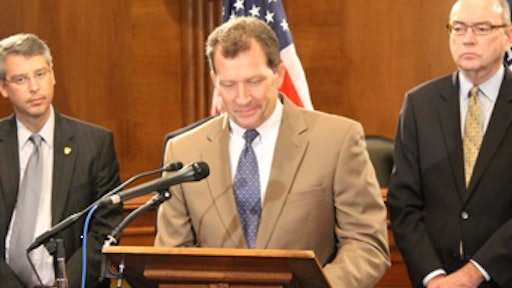 Federal surface transportation programs are facing an unprecedented crisis. According to data released this week by the Congress Budget Office (CBO), in FY 2015, the Highway Trust Fund (HTF) will be unable to support any highway or transit spending, jeopardizing more than $50 billion in annual investment.

"For me, those numbers aren't abstract, they're terrifying," said Watters, who is the president & CEO of Hoffman Equipment in Piscataway, NJ. "Those are my employees, my coworkers, my colleagues, and my friends, and they could very well find themselves out of work if Congress doesn't get its act together and solve this problem."

Watters was speaking at a press conference organized by Senate Environment & Public Works Committee Chairman Barbara Boxer (D-Calif.) to draw attention to the highway funding crisis. Watters said AED would stand with Chairman Boxer as she works with her House and Senate colleagues to put the HTF back on solid fiscal footing.

"This isn't a Democratic or Republican issue. This is a jobs issue," Watters said. "This is a battle for the health of the construction equipment industry and, more broadly, the future of the U.S. economy."

Here are some tips on how to handle unfair online reviews.
Nick Howell
April 21, 2021