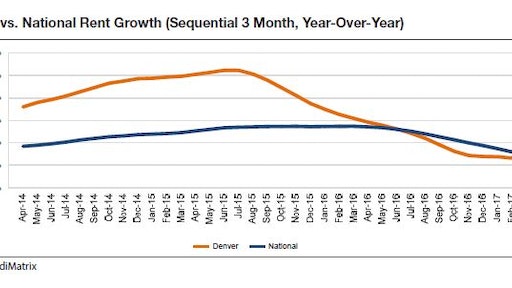 Denver rents were up 2.6% year-over-year in February, 20 basis points below the national rate. The average
rent was $1,381, $75 above the national average, according to Yardi Matrix. Like the nation as a whole, rents rapidly appreciated in 2015 and early 2016 before cooling in the latter part of the year.
YardiMatrix

High population growth and strong housing demand made Denver a hotbed for new commercial and residential construction. But an overstuffed development pipeline and the addition of 28,000 units over the last three years have eroded rent growth.

Denver’s downshift began last fall when rent growth dropped by 30 basis points, and continued over the past three months. Despite this moderation, investors remained high on Denver assets, bringing the total sales volume to a cyclical high of $6.7 billion in 2016.

Strong employment gains are creating demand, especially for renter-by-necessity assets, while increasing home prices also spur demand for rental units. Construction is a leader in job gains, with projects such as the $1.2 billion widening and covering of Interstate 70 in Northeast Denver contributing to growth. Infrastructure projects and the boost that trade received from legalization of cannabis have transformed the sector into an anchor of the metro’s economy.

The current multifamily expansion has been characterized by fast-paced development and growing investment activity. With more than 24,000 units underway and property sales topping $400 million in the year’s first two months alone, those trends are poised to continue in the foreseeable future. Yardi expects moderate rent growth of 3.5% in 2017.