GZA Recognized for Foundation Design of $3.98B New York Bridge 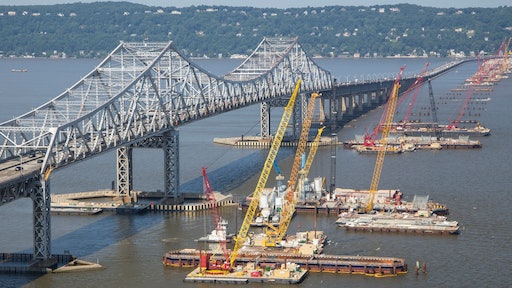 GZA, a leading geotechnical and environmental consulting firm, has been named a Grand Award winner of the 2017 American Council of Engineering Companies 50th Engineering Excellence Awards for its foundation design of the $3.98B New NY Bridge, which is the largest highway-bridge project currently underway in the U.S. The project was selected from 162 entries from around the country. In March of this year, the project was a Gold Award winner at the ACEC/MA Excellence Awards.

This Design Build project consists of two, 3-mile-long bridges that carry I-87/287 across the Hudson River between Tarrytown and Nyack, NY.

The foundation design resulted in significant cost saving to the taxpayers of New York, and was a key factor in winning this landmark project.

The project team overcame complex ground conditions along the bridge route, including a compressible clay layer up to 750 ft. deep. In this area, the team used steel pipe piles up to 360 ft. long, having capacities of 2,100 tons, which is unprecedented for the soft soils within the Hudson River Valley. In addition, there were nearly 400 fewer piles than proposed by other competitors, resulting in eliminating the cost of several thousand tons of steel, and the associated reduction in carbon emissions.

The bridge was designed and is being constructed by Tappan Zee Constructors, LLC (TZC), a consortium of Fluor, American Bridge, Granite, and Traylor Bros. HDR was the lead designer; major subconsultants included GZA, Buckland & Taylor and AECOM.

“We congratulate our project team on their foundation design that resulted in a significant construction cost savings. The innovative foundation design also advanced the state of the practice in geotechnical and foundation engineering relative to the behavior of long, large diameter piles in soft soils and will benefit other designers on future projects”, said William Hadge, CEO of GZA. “In addition, the greater spacing of foundation piers reduced the impact on the sensitive marine environment.”