Trump-administration tax-reform framework details reductions for corporate taxes, pass-through businesses, and eliminates estate taxes but lacks details on how to pay for cuts 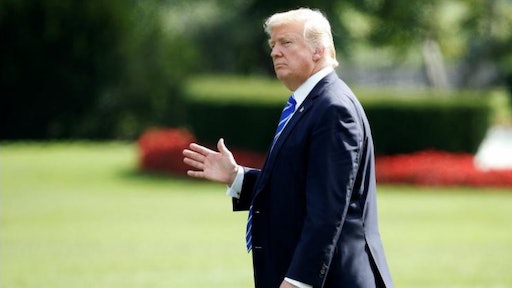 President Donald Trump on Wednesday proposed the biggest U.S. tax overhaul in three decades, offering to cut taxes for most Americans but prompting criticism that the plan favors the rich and companies and that it could add trillions of dollars to the deficit.

Reuters reports the proposal was forged during months of talks among Trump’s aides and top Republicans in Congress and it is embraced by big business. But the document contained scant details about how to pay for the cuts without fueling deficits. Legislating these critical details faces an uphill battle in Congress with Trump’s own party divided and Democrats hostile.

Trump has appealed to Democrats to support the plan, although they were not consulted in drafting it.

“It’s going to be something special,” Trump told reporters at the White House, touting it as “the largest tax cut essentially in the history of our country.”

The Financial Times reports that, although the White House stressed its determination to cut taxes for low- and middle-income families, many decisions on how to do so were delayed. Steve Rosenthal at the Tax Policy Center, a think-tank, said, “From this plan we can see that the Trump administration prizes tax cuts for U.S. multinationals above any other priority. Tax cuts for multinationals have been specified with some level of detail.”

Bloomberg coverage of Trump’s tax framework says it creates some suspense over where Congress will set the top tax individual income-tax rate – giving lawmakers flexibility to set it higher than the 35 percent that’s mentioned in the document. But another provision, which would slash the rate paid by owners of partnerships and limited-liability companies, would be a bonanza for people at the top of the income scale.

The administration proposes capping the tax rate on such pass-through businesses at 25 percent. Businesses organized that way don’t pay income tax themselves, but pass their earnings to their owners, who pay at their individual rates. Owners with high business incomes currently face a top rate of 39.6 percent on pass-through income.

Republicans describe the document as a guidepost for Congressional tax-writing committees to begin crafting legislation.