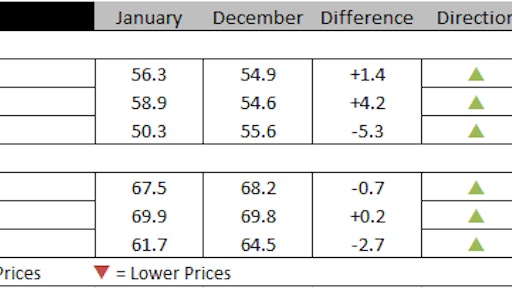 The materials/equipment price index posted a strong 58.9 in January, moving up from the December figure of 54.6. Once again, price increases were broad. Turbines and heat exchangers had lower prices but the remaining 10 categories in the current materials and equipment sub-index continued to show increasing prices. The diffusion index for most categories came in higher compared to last month. Ocean freight indexes, both Asia to the Unites States and Europe to the United States, had large increases compared to December, indicating a sharp improvement in conditions.

“Global water transportation remains in massive oversupply, aided somewhat by the actions of the shipping alliances,” said Paul Robinson, associate director - pricing and purchasing, IHS Markit. “Rates have risen, but mostly in line with costs. Worryingly, the alliances have been unable to stem the tide of ship orders, risking continued oversupply. In the short term, they have been more successful in pushing cost increases on to customers than the individual companies were in the past.”

Current subcontractor labor prices came in almost flat in January at 50.3, down from 55.6 last month, a surprising change given the health of the U.S. labor market. Regionally in the United States, labor costs remained unchanged in the Northeast and Midwest. They rose once again in the South and West. In Canada, the results were mixed; labor costs were flat in Eastern Canada and fell in Western Canada.

The six-month headline expectations index recorded another month of increasing prices. The index figure moved down from 68.2 in December to 67.5 this month. The materials/equipment index stayed positive at 69.9, a slight uptick from December’s 69.8. Expectations for future price increases were widespread, with index figures for every component coming in strongly above neutral. Price expectations for sub-contractor labor came in at 61.7 in January. Labor costs are expected to rise in all regions of the United States and Eastern Canada. They are expected to be flat in Western Canada.

In the survey comments, respondents indicated some optimism for 2018. In general, there were no shortages for materials.