Construction materials prices are down 1% from last quarter but remain 0.2% higher than one year ago 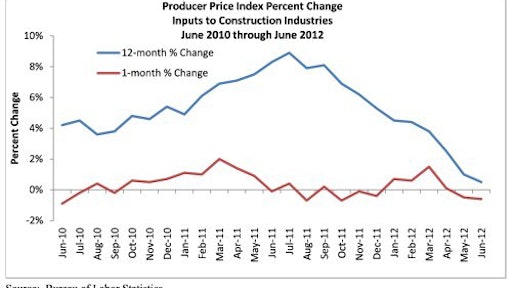 "Today's producer price index report, which indicates falling construction materials prices, reflects the collective impact of a number of economic forces,” said Associated Builders and Contractors Chief Economist Anirban Basu. “Much can be attributed to a coordinated global economic slowing, including a stable U.S. dollar and the decrease in demand for construction materials in much of the world.

"The economic weakness is well documented around the world,” Basu said. “For example, China’s economic expansion has slipped below 8 percent, and the rate of annualized growth in the United States during the first half of 2012 was below 2 percent.

"The elevated levels of uncertainty regarding near-term economic recovery are lingering like a dark cloud,” said Basu. “Until some substantial fraction of that uncertainty abates, lower materials prices will fail to spark renewed nonresidential construction spending recovery.

"While this is good news for construction contractors because materials prices are expected to remain well-behaved, the larger view is that overall construction activity is still lagging and may continue to do so in the months ahead,” Basu said.