52 US Housing Markets Have Returned to Pre-Recessionary Norms 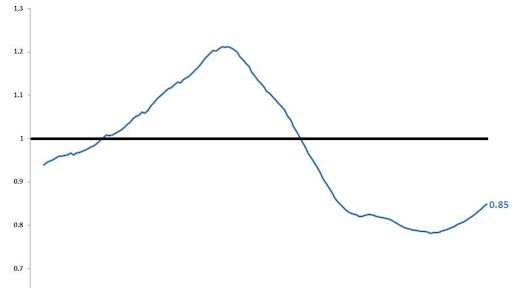 The U.S. national housing market registers at .85 on the October 2013 Leading Markets Index. It suggests the housing market is at about 85% of its pre-recession norm. The index is calculated based on housing starts, housing prices, and employment.

Housing markets in 52 out of the approximately 350 U.S. metro areas have now returned to or exceeded their pre-recessionary levels of activity, according to the new National Association of Home Builders/First American Leading Markets Index (LMI).

The index’s nationwide score of .85 indicates that, based on current permits, prices and employment data, the nationwide housing market is running at 85 percent of normal activity.

Baton Rouge, La., tops the list of major metros on the LMI, with a score of 1.41 – or 41 percent better than its last normal market level. Other major metros at the top of the list include Honolulu, Oklahoma City, Austin and Houston, Texas, as well as Harrisburg, Pa. – all of whose LMI scores indicate that their housing markets now exceed previous norms.

Looking at smaller metros, both Odessa and Midland, Texas, boast LMI scores of 2.0 or better, meaning that their housing markets are now at double their strength prior to the recession. Also at the top of the list of smaller metros are Casper, Wyo.; Bismarck, N.D.; and Florence, Ala., respectively.

“This index helps illustrate how far the U.S. housing recovery has come, and also how much further it has to go as we continue to face some significant headwinds in terms of credit availability, rising costs for lots and labor, and uncertainties regarding Washington policymaking,” said NAHB Chairman Rick Judson, a home builder from Charlotte, N.C.

The LMI shifts the focus from identifying markets that have recently begun to recover, which was the aim of a previous gauge known as the Improving Markets Index, to identifying those areas that are now approaching and exceeding their previous normal levels of activity.

More than 350 metro areas are scored by taking their average permit, price and employment numbers for the past 12 months and dividing each by their annual average over the last period of normal growth. For single-family permits and home prices, 2000 to 2003 is used as the last normal period, and for employment, 2007 is the base comparison. The three components are then averaged to provide an overall score for each market; a national score is calculated based on national measures of the three metrics.

An index value above one indicates that a market has advanced beyond its previous normal level of economic activity.

“Smaller metros are leading the way to a housing recovery, accounting for 43 of the top 50 markets on the current LMI,” observed NAHB Chief Economist David Crowe. “This is very much in keeping with the results of our previous index for improving markets, and is an indication of the extent to which local economic conditions dictate the strength of individual housing markets.”

“The housing markets of 118 metros scored by the LMI this month show activity levels of at least 90 percent of their previous norms – a very encouraging sign of things to come,” said Kurt Pfotenhauer, vice chairman of First American Title Insurance Co., which co-sponsors the LMI report.

Contractor Confidence Rises in First Half of 2013