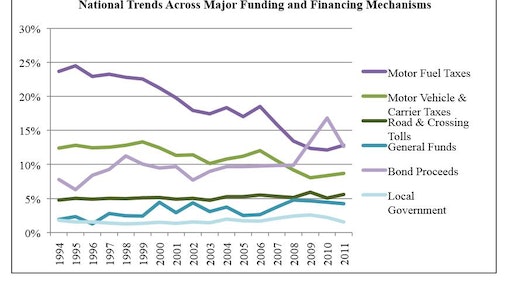 A study by researchers at the College of William & Mary’s Thomas Jefferson Program in Public Policy (TJPPP) released January 31,  examines the vast array of funding and financing mechanisms states are using to pay for roads and bridges. The report, which was sponsored by Associated Equipment Distributors, includes a chart to allow quick comparison between state programs.

The study comes as the federal highway program faces unprecedented challenges. The Congressional Budget Office reported in July 2013 that due to inadequate Highway Trust Fund (HTF) resources, Congress would need to reduce the authority to obligate funds in FY 2015 to zero for both highways and transit.

The long-term outlook for the federal program is equally dim. An AED-sponsored report by TJPPP researchers released in 2013 projected that over the next two decades, HTF revenues will fall $365 billion short of the amount necessary to maintain annual federal highway spending at current levels adjusted for inflation (approximately $40 billion per year).

One of the goals of the new study was to help lawmakers in Washington, D.C. better understand options to restore the HTF’s long-term solvency. But whatever the outcome of the highway debate on Capitol Hill, given staggering road, bridge and transit needs and the mounting costs of congestion, in the years ahead states will have to invest more in infrastructure themselves.

Reference Guide: A Menu of Solutions to America’s Infrastructure Crisis

Reference Guide: A Menu of Solutions to America’s Infrastructure Crisis

Report: Impact of Fuel Use Trends on the Highway Trust Fund's Present and Future