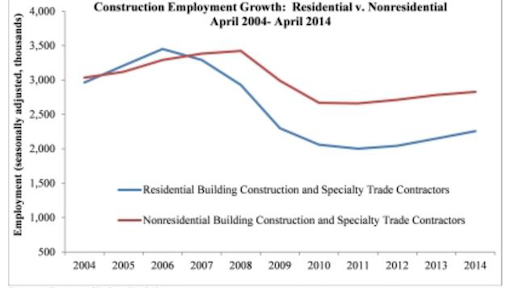 The U.S. construction industry gained 32,000 jobs in April, according to the May 2 employment report by the U.S. Department of Labor (DOL). Nonresidential construction segments added 8,100 jobs in April, up from the 5,700 jobs (revised) added in March, while the residential sector continued to build momentum, adding 13,100 jobs for the month. Heavy and civil engineering led the way by adding 10,500 jobs in April. The segment has added an impressive 34,900 jobs in the past 12 months.

“With the 32,000 construction jobs added in March, total construction employment has now eclipsed the six million-job mark for the first time since June of 2009,” said Associated Builders and Contractors Chief Economist Anirban Basu. “I expect construction employment to show marked improvement in the second quarter now that it is clear that the sluggish first quarter numbers were an aberration brought about by the unusually harsh winter."

The national construction unemployment rate fell nearly 2 percent to 9.4 percent on a non-seasonally adjusted basis in April while the national unemployment rate fell to 6.3 percent, its lowest level since September of 2008. The civilian labor force dropped by 806,000 in April, and the number of unemployed re-entrants and new entrants to the labor force declined by 534,000.

“The lower unemployment rate suggests a pickup in economic activity; however the decline is mostly attributable to the departure of a significant number of workers from the U.S. labor market,” said Basu. “Higher-than-expected job growth and upward revisions to prior months’ employment figures make this an encouraging jobs report and I expect the construction unemployment rate to hover around 9 percent in the coming months.”