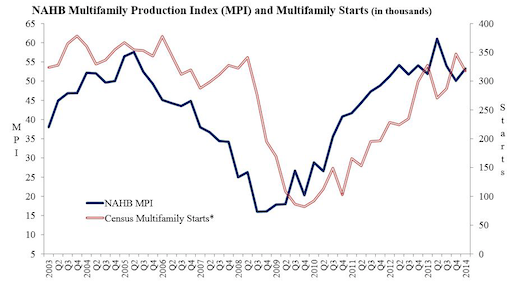 The quarterly Multifamily Starts is the average of the three months of seasonally adjusted multifamily housing starts from that quarter.

Production of apartments and condominiums showed positive growth in the first quarter of 2014, according to the latest Multifamily Production Index (MPI), released today by the National Association of Home Builders (NAHB). The index increased three points to 53, which is the ninth consecutive quarter with a reading of 50 or above.

The MPI provides a composite measure of three key elements of the multifamily housing market: construction of market-rate rental units, low-rent units and “for-sale" units, or condominiums. In the first quarter of 2014, the MPI component tracking builder and developer perceptions of low-rent units increased one point to 48 and for-sale units jumped eight points to 54. Meanwhile, the index tracking market-rate rental properties slipped one point to 59, but has remained consistently above 50 since the fourth quarter of 2010.

“Developer confidence in market-rate and low-rent units has been pretty stable for quite some time,” said W. Dean Henry, CEO of Legacy Partners Residential in Foster City, Calif., and chairman of NAHB's Multifamily Leadership Board. “Now we’re really starting to see confidence in the condo market start to catch up—a segment that had been delayed in its recovery—along with the single-family market.”

The Multifamily Vacancy Index (MVI), which measures the multifamily housing industry's perception of vacancies, dropped one point to 37. With the MVI, lower numbers indicate fewer vacancies. The MVI improved consistently through 2010 and has been at a fairly moderate level since 2011 after peaking at 70 in the second quarter of 2009.

“The MPI shows stable production of apartments and condos, which is what our forecast calls for,” said NAHB Chief Economist David Crowe. “In 2014, we expect multifamily starts to grow about 6 percent over 2013, to about 326,000 units.”

The MPI and MVI have continued to perform well as leading indicators of U.S. Census figures for multifamily starts and vacancy rates, providing information on likely movement in the Census figures one to three quarters in advance.