October Single-Family US Housing Starts Up 4.2% Despite Overall Drop 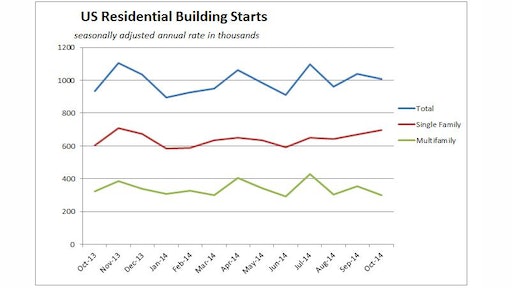 Issuance of U.S. housing permits was up 4.8% to an annual rate of 1,080,000 units in October, the eighth month out of ten that permits have been over 1 million.

Single-family housing starts in October rose to the highest level since November 2013 while a 15.4% drop in the more-volatile multifamily sector brought combined nationwide starts activity down 2.8% to a seasonally adjusted annual rate of 1.009 million units, according to figures from the U.S. Department of Housing and Urban Development and the U.S. Census Bureau.

“The increase in single-family starts shows that the housing market continues to recover at a steady, gradual pace,” said NAHB Chief Economist David Crowe. “On the multifamily side, production is stabilizing above historic levels as demand for rental housing increases.”

October’s multifamily starts estimate was a seasonally adjusted annual rate of 313,000 units. Multifamily production has tended to see-saw from month to month, but starts remain in the healthy range of over 350,000 per year when averaged over several months.

Regionally in October, combined housing production dropped in Northeast, Midwest and West, with respective losses of 16.4%, 18.5% and 10.9%. Total production rose in the South by 10.1%.

Regionally, the Northeast and Midwest registered overall permit losses of 21.5% and 11.4%, respectively. The South and West posted respective gains of 8.8% and 21.6%.

The continued modest improvement in the single-family housing market supports expectations of more and stronger growth in 2015 as consumers gain confidence in their economic futures, mortgage rates remain very low by historic standards and home prices continue to be affordable to those with good credit and a solid employment history.