While the construction industry experienced a hiring increase in December 2014, the number of unfilled position also increased slightly to 147,000 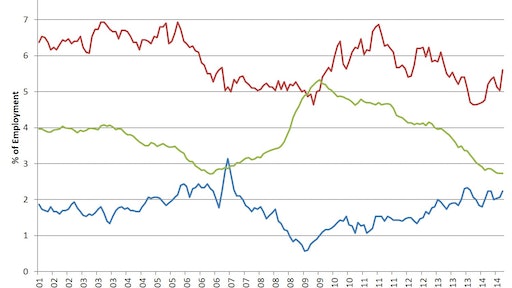 The construction industry hiring rate, as measured on a three-month moving average basis, increased in December to 5.6%, showing strength after the weakness exhibited at the start of 2014.

The number of open, unfilled construction sector positions increased slightly in December. The construction labor market was characterized by change at the end of 2014 as hiring increased along with a large number of quits by workers.

According to the BLS Job Openings and Labor Turnover Survey (JOLTS) and National Association of Home Builders (NAHB) analysis, the number of open construction sector jobs for December (on a seasonally adjusted basis) rose to 147,000. The December level marks the third highest monthly measure of unfilled jobs in construction during the post-recession period.

On a three-month moving average basis, the open position rate for the construction sector increased to 2.23 percent in December. Over the last year, the open construction jobs rate has typically been higher than the rates that were experienced during the 2001 to 2003 period prior to the building boom.

The sector hiring rate, as measured on a three-month moving average basis, increased in December to 5.6 percent, showing strength after the weakness exhibited at the start of 2014.

The December number of job quits in construction increased substantially to 156,000, almost doubling the November measure. The monthly quits rate for the month (2.5 percent) was the highest since 2006. The large number of quits, along with growth in hiring, may reflect some churn among workers and employers within the sector.

Monthly employment data for January 2015 (the employment count data from the BLS establishment survey are published one month ahead of the JOLTS data) indicate that total employment in home building/remodeling stands at 2.417 million, broken down as 692,000 builders and 1.725 million residential specialty trade contractors.

In January, home builders and remodelers added 20,100 jobs to the residential construction sector on a seasonally adjusted basis. Over the last 12 months, the industry has created 162,000 jobs.

Since the low point of industry employment following the Great Recession, the residential construction industry has gained 433,300 positions, although employment remains 1.033 million lower than the peak level seen in early 2006. Employment growth for the sector has been steady recently, adding on average just a little more than 14,000 jobs per month over the last six months.

With the release of next month’s January JOLTS data, BLS will revise the data from January 2010 to the present. Given the importance that policymakers, such as the Federal Reserve, have placed on these data, next month’s report will act as check on whether recent trends hold – namely rising job openings.