28 States Add Construction Jobs in May 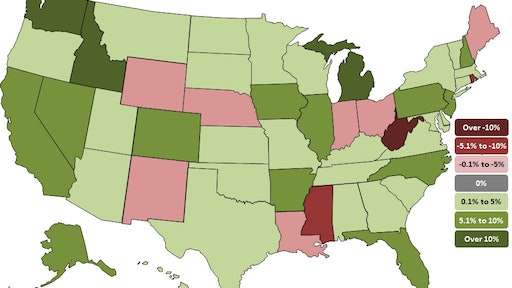 The six states that added the highest percentage of construction workers in May were all in the Northeast, a region that has seen less growth in construction in recent years than other parts of the country.

Construction firms added jobs in 40 states and the District of Columbia between May 2014 and May 2015 and in 28 states and D.C. between April and May, according to an analysis of Labor Department data by the Associated General Contractors of America. Association officials noted that the mix of states adding and losing construction jobs continues to vary amid fluctuations in demand.

“Construction has outpaced the overall economy in adding workers nationally but the mix of states with construction job gains keeps changing,” said Ken Simonson, the association’s chief economist. “The top 10 states for job gains from April to May had previously lagged in adding construction workers, while energy-producing and other states that had record construction employment a few months ago have slipped.”

Ten states shed construction jobs during the past 12 months with West Virginia (-12.3 percent, -4,200 jobs) losing the highest percent of construction jobs. Other states that lost a high percentage of jobs for the year included:

Simonson noted that the six states that added the highest percentage of construction workers in May were all in the Northeast, a region that has seen less growth in construction in recent years than other parts of the country. Construction employment increased by 4.3 percent from April to May in Connecticut (2,400 jobs) and New Hampshire (1,000 jobs). Those states were followed by New York (4.2 percent, 14,200 jobs), Vermont (4.1 percent, 600 jobs), Maryland (2.9 percent, 4,500 jobs) and Massachusetts (2.7 percent, 3,500 jobs). New York added the largest number of jobs for the month, followed by California (6,100, 0.9 percent) and Maryland.

“Although most states are adding construction workers, only five have exceeded pre-recession employment peaks, and all five slipped in May,” Simonson observed. “This shows that the industry’s recovery remains vulnerable to a downturn in government investment in infrastructure as well as market forces.”