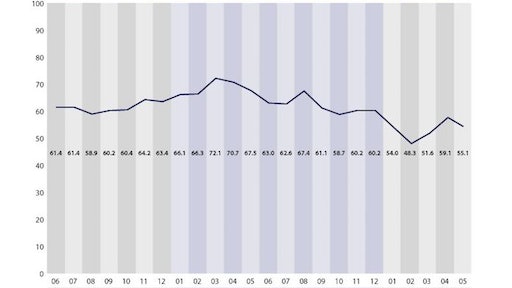 The Equipment Leasing & Finance Foundation's May 2016 Monthly Confidence Index for the Equipment Finance Industry (MCI-EFI) showed lenders' confidence in the equipment finance market slipped four points to 55.1 after increases in March and April.

Designed to collect leadership data, the index reports a qualitative assessment of both prevailing business conditions and expectations for the future reported by key executives from the $1 trillion equipment-finance sector.

Respondents to the MCI-EFI survey include a cross section of industry executives from banks, independents and captive equipment-finance companies. The MCI-EFI polls the same pool of 50 organization leaders monthly so the results constitute what the foundation calls "a consistent barometer of industry confidence."

When asked about the outlook for the future, MCI-EFI survey respondent Valerie Hayes Jester, pesident, Brandywine Capital Associates Inc., said, “Application activity has been strong in the last 30 days, but I suspect that is pent-up demand from customers who delayed equipment purchases in the last quarter. Rates continue to be low and credit approvals are not a factor. It is more the reluctance of the small business owner to make expansion decisions given our current political environment that concerns me.”

Most-read construction stories of the week include construction details of the COVID relief bill, how key cement industry players are reducing the industry’s carbon footprint, how to move 50,000 cu yd per week down a 3:1 slope, and more
Larry Stewart
January 8, 2021
Follow Us