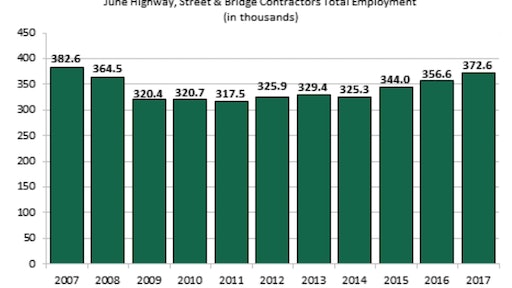 Highway and bridge contractor employment has been rising for the last four years but is still below pre-recession levels.
ARTBA

Highway and bridge contractors added 16,000 workers to their payroll in June 2017 compared to June 2016, according to the latest data from the U.S. Bureau of Labor Statistics.

With help from mechanics, service managers, and a fully implemented preventative maintenance program, you can keep your fleet (and in turn, your business) running in top shape.
Fleet Cost & Care
January 7, 2021
Latest
Business

Soft, textile-based exoskeleton weighs less than 4 lbs. and takes 50 lbs. of strain off the user's back muscles.
HeroWear LLC
January 5, 2021