Nonresidential construction spending contracted 1.6% on a monthly basis in June but was up compared to year ago levels 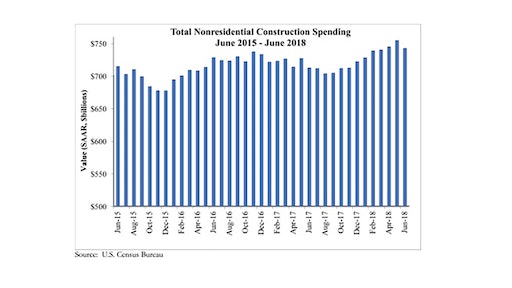 “The hope is that June’s construction spending setback is merely a statistical aberration,” said ABC Chief Economist Anirban Basu. “That is certainly a possibility given the recent second quarter gross domestic product report, which among other things indicated extraordinarily rapid growth in the construction of structures. Other data, including ABC’s Construction Backlog Indicator, indicate ongoing elevated levels of demand for construction services. Construction employment statistics are also consistent with industry expansion. 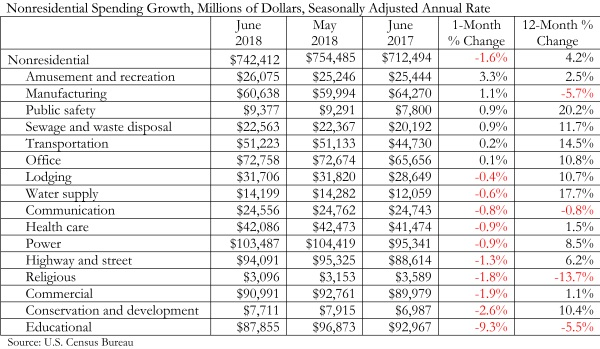 “But as tempting as it is to simply relegate June spending data to the back burner, there are other less benign explanations,” said Basu. “One relates to worker productivity. With construction firms suffering grave difficulty finding skilled workers, it may simply be a case of slowed construction service delivery. However, this is not an especially compelling explanation for one month of data. The shortage of human capital is long-lived, and the recent pace of construction hiring has been rapid.

“A more likely explanation is that the recent surge in construction materials prices is resulting in material acquisition delays,” said Basu. “This has the effect of lengthening projects as contractors painstakingly search for the most affordable sources of steel, lumber or other inputs. Since monthly construction spending declines were apparent in both private and public segments, it is also possible that certain projects have been put on hold, with the hope that input prices will eventually decline to lower levels.”