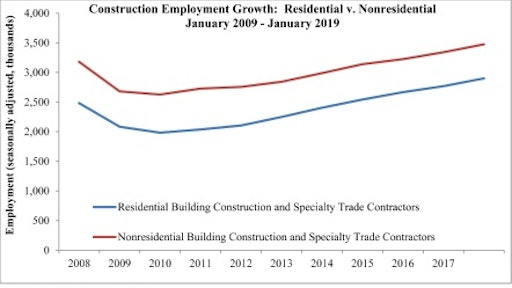 “Today’s numbers are especially important for construction industry leaders to consider,” said Anirban Basu, ABC’s chief economist. “Because of the federal government shutdown and the market volatility that characterized last year’s final quarter, confidence among consumers and many business operators had been shaken. This is a far cry from a year ago when many economic actors were upbeat after the brilliant financial market performance in 2017 and the passage of tax reform late that year. Today’s jobs report counters concerns that confidence had fallen far enough to jeopardize broader economic momentum and that the federal government shutdown could impact the January employment numbers in a meaningful and negative manner.

“Instead, today’s employment numbers were exceptional,” said Basu. “Not only did the nation manage to add more than 300,000 net new jobs during the initial month of 2019,  labor force participation rose further, indicating that more people are being persuaded to participate in the strongest labor market in a generation. What’s more, construction job totals surged higher, with nonresidential construction adding 28,000 on a seasonally adjusted basis in January. This comports neatly with elevated backlog and the notion that a strong economy continues to create fresh opportunities for contractors.

“Today’s data also indicates that contractors will continue to wrestle with their most profound challenge: the lack of sufficient numbers of suitably skilled workers,” said Basu. “This strongly suggests that wage and cost pressures facing the industry will persist well into 2019 and likely beyond. Today’s numbers also help to dampen any emerging concerns regarding a recession in the near term.”

Bonnie Mauldin, managing director of The Mauldin Group shares insights on how to market your construction business to help secure work in the current environment.
August 6, 2020
Follow Us