'Seldom does a jobs report tell us less about the direction of the US economy. While there is scarcely any evidence of coronavirus impact in today’s employment release, clearly, the economy's trajectory has shifted markedly' 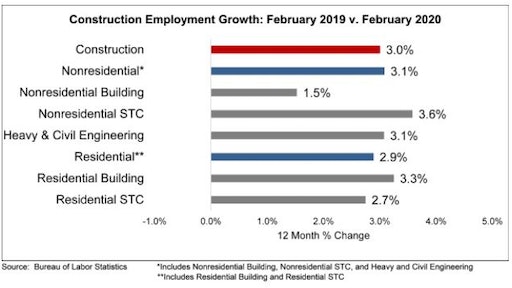 The construction industry added 42,000 net new jobs in February, according to an Associated Builders and Contractors analysis of data released today by the U.S. Bureau of Labor Statistics. On a year-over-year basis, industry employment has expanded by 223,000 jobs, an increase of 3.0%.

Nonresidential construction employment increased by 19,800 jobs on net in February and is up by 139,900 net jobs over the last 12 months. There were job gains in all three nonresidential segments, with the largest increase in nonresidential specialty trade contractors, which added 13,400 jobs. Remaining job additions were split evenly between nonresidential building (+3,400) heavy and civil engineering (+3,000).

The construction unemployment rate was 5.5% in January, down 0.7 percentage points from the same time last year. Unemployment across all industries declined back to 3.5% last month, effectively a 50-year low.

“Seldom is there a jobs report that tells us less about the direction of the U.S. economy than this one,” said ABC Chief Economic Anirban Basu. “While there is scarcely any evidence of coronavirus impact in today’s employment release, clearly, the trajectory of financial markets and the broader economy has shifted markedly over the last two weeks. While the level of construction activity is unlikely to be fundamentally altered in the near-term—except for when sick workers are asked to stay home—these impacts will eventually catch up to the nation’s construction sector.

“On the front lines of the intensifying public health crisis are industries such as travel, lodging, restaurants, sporting events and other economic elements that involve large public gatherings,” said Basu. “With many corporate entities and households deeply indebted, a fragility in the U.S. economy is now being exposed. Not only will this translate into a surge in bankruptcies as the crisis deepens, but it will also result in generally weaker balance sheets, which could eventually impact design work and construction starts.

“It is important not to overstate the magnitude of the outbreak,” said Basu. “America has experienced other public health crises in recent years. After each occasion, the broader economy recovered, often quickly. That said, this time feels different, given the ease with which the affliction has spread through a growing number of American communities. Even before the outbreak, contractors were urged to begin to raise cash as a defensive mechanism against the next downturn. That advice remains firmly in place.”