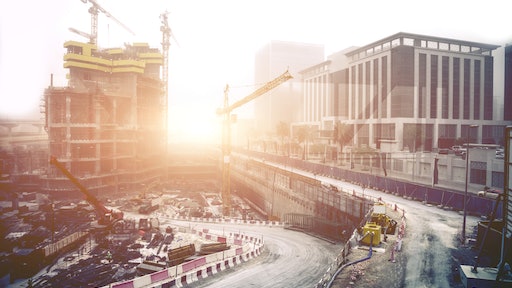 National nonresidential construction spending decreased by 1.8% in April, according to an Associated Builders and Contractors analysis of U.S. Census Bureau data. On a seasonally adjusted annualized basis, spending totaled $801.8 billion for the month, a 0.9% increase from April 2019.

Of the 16 subcategories, 13 were down on a monthly basis. Private nonresidential spending declined 1.3% in April, while public nonresidential construction spending was down 2.5% for the month. 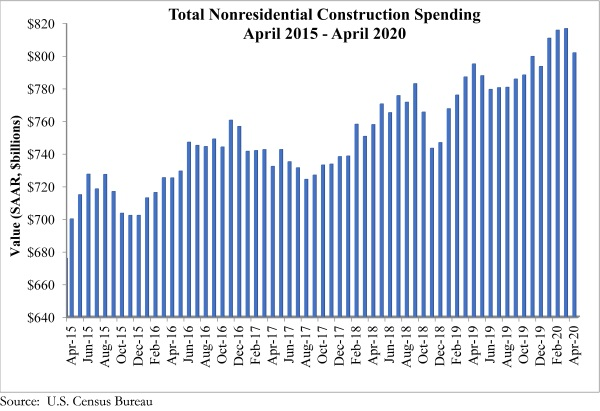 “Nonresidential construction has fared far better than most economic segments during the COVID-19 crisis, but the industry’s headline spending numbers fail to fully capture the damage inflicted on many key segments by the pandemic,” said ABC Chief Economist Anirban Basu.  “For instance, spending in the lodging category was down more than 12% in April relative to a year ago and down 11% in the amusement and recreation category. Spending is also down meaningfully in a number of categories that are public-sector intensive, including education and highway/street.

“In much of the nation, construction was deemed an essential industry, which helped to mitigate spending decreases,” said Basu. “But in many places, including in New York, New Jersey, Boston, Pennsylvania and California, construction was deemed nonessential. That has rendered ongoing work and backlog—which stood at 7.8 months in April, according to ABC’s Construction Backlog Indicator—less of an effective shield against the early stages of the broader economic downturn than it is normally. The nonresidential construction spending data would have been far worse but for a massive increase in spending in the public safety category, which is up 35% year over year due to investments made to shore up capacity to deal with COVID-19.

“As the nation slowly reopens, nonresidential contractors will face many challenges,” said Basu. “State and local government finances have been compromised, jeopardizing infrastructure spending going forward. Many office suites and storefronts have been vacated, which will suppress demand for new construction going forward. Capital will also be scarcer, resulting in greater difficulty securing financing for projects. Moreover, if the past is prologue, many dislocated construction workers will find jobs in other industries, given construction’s tendency to be among the last economic segments to fully recover.” 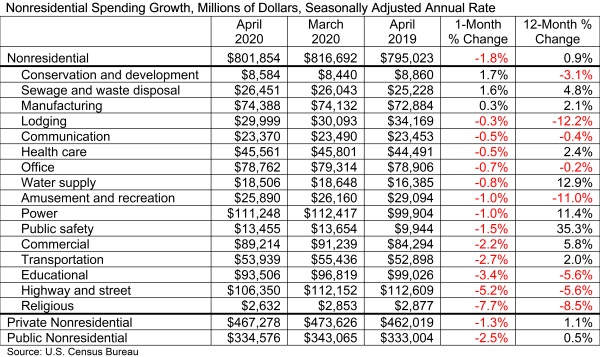