The Art of Concrete 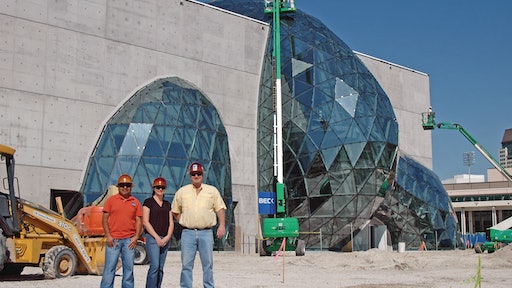 When Reinforced Structures, Inc. of Clearwater, Fla., took on the concrete construction work of the new Dali Museum, the company had a number of challenges to overcome. First, this was RSI's first project using self-consolidating concrete (SCC). Second, the building needed to stand up to Florida's unique weather and ocean side environment. And third, the cast-in-place structure was designed to look like architectural precast panels and serve as the cornerstone for St. Petersburg, Fla.'s downtown arts district. RSI found success on this project in planning, organization and open lines of communication with every member of the construction team.

"A lot of teamwork went into this building," says RSI president Steve Whitely. "When we got this job we picked an A-Team, from the concrete supplier to the formwork supplier to the reinforcing supplier. Along with the structural engineer, general contractor and architect, we were all involved in planning. It was an interesting job and everyone was involved in making the project a success."

The building
The new Dali Museum sits on Tampa Bay, in downtown St. Petersburg, just a few blocks from the simple concrete structure that currently houses the largest collection of Salvador Dali art outside the surrealist painter's homeland of Spain. The Dali Foundation and city of St. Petersburg saw great potential for the museum, which is the most visited museum in Florida. They wanted not just a structure to house the Dali collection, but a structure that would be a draw for visitors itself.

The 60,000-square-foot building was designed to withstand a Category 5 hurricane. It has 18-inch-thick concrete walls, was built with 10,000 yards of concrete and includes 1,000 tons of reinforcing steel. Building strengths were measured at more than 7,500 psi. To help combat the ocean's salt air and its corrosive effect on reinforcing steel, a water inhibitor admixture was specified in the mix and the rebar is set back in the wall 2.5 inches, double the traditional distance between the outside of the wall and the rebar. Bentonite water stops were included at all joints.

The new Dali Museum, the first example of an exposed architectural cast-in-place SCC building in Florida, features large hurricane-rated glass structures growing off the front of the museum, giving visitors a dose of natural light and a view of Tampa Bay.

Reinforced Structures Inc. began its work on the Dali Museum two years before it was officially named concrete subcontractor on the project. The company was approached by the general contractor on the job, The Beck Group, to work through estimates on precast concrete, cast-in-place concrete, structural steel buildings and variations of those building techniques combined. It was during the preconstruction planning that the design team decided on self-consolidating concrete, or self-compacting concrete, for the construction of the building.

Self-consolidating concrete (SCC) is a typical concrete mix doused with superplasticizer admixtures to make the mix highly flowable while maintaining proper aggregate segregation. A few elements of the Dali Museum's construction made SCC the best choice for the project. For one, the museum design included unique openings in the walls and heavy rebar congestion; SCC can easily flow under and around openings in formwork and through intricate rebar. The architect also wanted a smooth finish and sharp corners with no chamfers; SCC's lack of bug holes and smooth texture after the forms have been removed leaves a pristine architectural finish.

RSI was involved with more preconstruction planning on the scheduling and sequencing of the building's construction. They worked nearly a dozen mock-ups before construction began to get the forming system and mix right for the project.

Whitely says since starting his company in 2003, he has made a point for his turn-key concrete contracting business to not only offer all things concrete, but also supply pre-construction and value engineering services to its customers. It keeps customers requesting RSI's services, the way The Beck Group reached out to them on the Dali project. "When a client hires us, we help them budget and put their projects together," Whitely says. "Once we get our foot in the door, GCs don't want to work with anyone else. Other subcontractors forget that we are in the service industry."

The construction process
RSI was officially named subcontractor on the Dali Museum project in December 2008. After the deep foundation was installed, RSI took to work on the building in April 2009, completing the majority of the concrete work by November of that year.

The complexity of the project required careful planning of the forming system. RSI used crane-set steel forms and HDO plywood. The forming system was specifically engineered to hold full liquid head pressure of the SCC, about 21,000 pounds per square foot for each 26- by 14-foot panel. Each panel required 16 taper ties.

Working with an SCC mix demands tremendous pre-planning and quality assurance measures. An SCC mix is made up of a complicated recipe so great attention must be paid to ensure the mix is the same from batch to batch, and its flowability decreases the longer it sits so timing is important. To combat these challenges, RSI chose Florida Rock, A Vulcan Company, as the concrete producer on the job. Florida Rock has DOT-approved concrete plants in close proximity to the construction site to help avoid traffic issues. The ready mix supplier had counters on its drums, the drivers went through training for working with SCC and the same trucks were used on the Dali Museum pours every day. RSI also had quality control representatives from Florida Rock and Grace Construction Products, manufacturer of the SCC admixtures, on the job. The slump flow (SCC's version of a slump test) was closely monitored for mix consistency from day to day. "We weren't afraid to send batches back when we didn't get the quality we wanted, but that didn't happen often," says Brooke Madson, Tampa area manager for RSI.

RSI vice president and head field superintendant, Miguel Tellez, closely managed the project's 70 wall pour operations to maintain consistency in the field. Because each wall form was different, the crews started each day by reviewing the formwork.

Its first foray into SCC didn't go without surprises for RSI. "There was a lot to learn in those early pours," Whitely recalls, especially when it came to the extreme hydration temperatures SCC can reach. "We would take the forms off and the concrete would be smoking - you couldn't touch the concrete it was so hot."

The temperature issue forced RSI to make a few adjustments. For one, RSI crews encountered something called sugaring. "SCC can reach 180 degree temperatures during the curing process. This was so hot, it was pulling sugars out of the plywood and turning the concrete red. That forced us to change our plywood manufacturer," Madson explains.

The extreme temperatures would have melted the form liners RSI would have typically used, leading the company to use an extruded polyresin for blockouts, reveals and Salvador Dali's signature on the outside of the building.

Another challenge was the inclusion of reveals between formwork to make the building look like one continuous wall. "We built this building from the outside in - walls first then inside beams and decks - to avoid seeing where deck pours would have bulkheaded into walls," Madson explains. Where exterior beams tied into the exterior walls, areas of 8-foot rebar splices were left. Where the rest of the deck was connected to the walls, ERICO's LENTON Couplers were specified.

A staircase to nowhere
A major focal point of the new Dali Museum is a 56-foot-high spiral concrete staircase that starts in the building's first floor lobby, carries visitors to the third-floor atrium, and winds upward into a taper toward the top of the building's glass atrium. The base of the staircase has a 22 foot diameter. The wall of the spiral is 1 foot thick and the staircase is five feet deep. After the staircase reaches the third floor where the stairs end, the wall tapers to 8 inches wide.

"The staircase was originally planned for steel construction because the architect was under the impression that it couldn't be done in concrete," Whitely explains. "We bid it, got it, but didn't know how we would build it at that time."

This feature of the building took immense planning, logistics and labor to complete. RSI interviewed three formwork companies for the staircase construction. They chose Peri because they had radius forms already available, avoiding a completely custom system and saving dollars in the budget.

The engineering company on the Dali Museum project wrote the initial concept design for the spiral staircase and the sequencing plan for loading and unloading. Peri went through the engineer's plan and detailed the construction of the shoring.

"A big concern with the spiral was the settlement and twist of the concrete, so we had to plan on 8 inches of settlement and 11/2 inches of twist," Madson explains. "After each pour and after each stripping sequence, we had to resurvey the staircase and adjust for anything that was out of plumb or design. In addition, we had to make sure the staircase followed general building code standards for rise and twist."

The concrete work on the new Dali Museum was completed in late 2009, with the staircase work finishing up in Spring 2010. The inside of the building is still under construction and on track to meet the deadline for the January 2011 grand opening of the new museum.

"We took on a pretty ambitious schedule with this project, but with everyone's help and detailed planning we finished a week ahead of time," Madson says. "We hope that after seeing this project and the success we achieved, people won't think of us as a small contractor but a concrete company that can take on anything that's thrown our way."

Project at a Glance

Nothing Surreal about Waterproofing Protection for New Dalí Museum