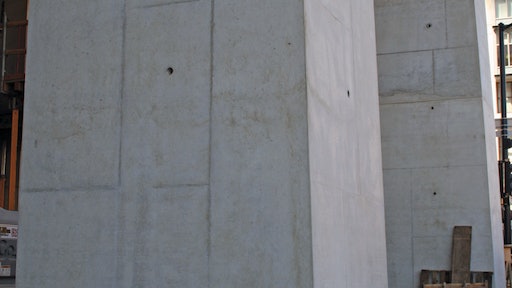 The construction schedule at the San Diego Central Library project was tight. Concrete subcontractor Morley Construction had less than 30 days between the time they were awarded the project and they were on site to start the underground parking garage.

During this time Morley conducted a series of physical mockups and technical R&D to test plywood types, form releases and mix designs. One area that required an added level of testing was the heat of hydration issues inherent in mass concrete when placing the 6-foot-square and larger columns, part of the structure’s moment frame support. Locally available, architectural grade Type II cement from Colton, Calif., had been specified in 2004, but Type II was no longer available because of characteristic changes in the lower strata limestone being quarried in 2010. Instead, initial mock-ups using the newly available Type III Colton cement resulted in internal temperatures exceeding 250 degrees in the first 24 hours — problematic since the structural engineer specified a max internal curing temperatures of 180 degrees to minimize thermal cracking and ensure the long-term durability of the concrete.

To alleviate the situation, Morley worked with the cement producer and requested a change in the cement type to a less refined and less heat producing Type I Colton. A change to the Type I Colton Cement was granted after it was proven max heat gains could be achieved within the engineer’s specified parameters.

Morley went through a series of nine mockups in heat and strength testing. The last two tests were full-scale, 75-inch-square by 13-foot high columns to exactly mimic the worst case scenario.

Once on site for the actual mass concrete pours, Morley worked with its concrete supplier to further improve the placement process. “When we were pouring mass concrete we had the supplier limit the loads to 5 yards per truck,” says Sean Fleming, project manager with Morley Construction. “That meant the concrete didn’t sit too long in the truck under a hot sun. That kept the concrete fresh and workable and allowed us to take a little more time between lifts in the columns.” To flatten the heat gain curve during mass concreting, pours were placed as early as possible, retarding admixtures were introduced, and water and ice was used.

With any major change comes the possibility for extra expense. Luckily, the move to the Type I cement could be offered as a value engineering savings because the Type I Colton Cement goes through less processing than its Type II or Type III counterparts. “It’s quite remarkable that we were not only able to overcome the heat issues with the specified product without charging more, but we were able to save the client some money,” Fleming says. A material savings of about 45 percent was achieved in mix designs affected by the switch.

Read more about the new San Diego Central Library in the profile of Morley Construction Company from the April/May 2012 issue of Concrete Contractor magazine.

Safety Success During the Construction of the San Diego Central Library