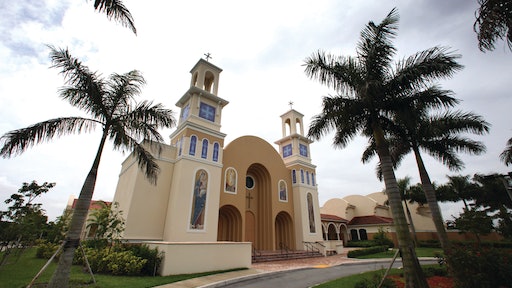 Saint Mary Coptic Orthodox Church in Delray Beach, Fla., was originally designed as reinforced masonry with metal gauge framing, lath and stucco at the facades. The tilt-up conversion features 95 panels plus a full dome, 29 feet 8 inches in diameter and with a weight of 101,900 pounds, cast and lifted as a panel.

The front facade contains the project's heaviest panel at 201,220 pounds. This panel rests on four substantial column/panel extensions between the towers, and a series of panels step down behind it to form a vault design. Behind the altar is a series of three panels, at a radius of 11 feet, to form a 180 degree backdrop. Two smaller 3-foot radius panels form a niche for a side chapel. The main dome rests on a solid 8-inch-thick by 6-foot-tall, 360-degree concrete wall that is supported by a 14-inch-thick roof panel, which was all poured on a casting bed and then erected. Two smaller half domes were cast in place on top of radius panels after the panels were erected.

The twin towers, which exceed 65 feet in height, were built with a series of panels. One tower serves as an elevator hoist way while the other is utilized as an exit stairway for the mezzanine. Side slope roof panels serve as a tie between lower outer panels and upper spandrel panels that rest on steel beams with weld connections. Crane access was limited to one elevation.

Temporary casting beds were used for the majority of panels with the erection sequence critical in the layout of panels, as the building was constructed front-to-back. Center sections of slab on grade were left out so that the crane crawler could walk through and place panels safely.

Sometimes cracks require repairing but with so many options, how do we design and select the best repair option? It’s not as difficult as you may think.
Kim Basham, PhD PE FACI
March 22, 2021
Follow Us