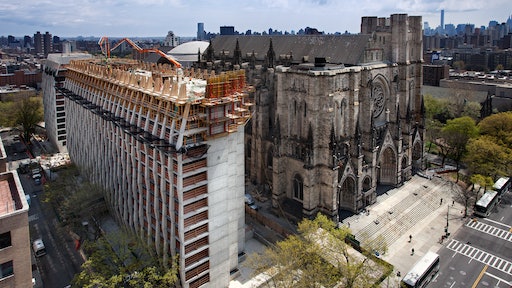 The housing project actually touches the historic church at one point and is located just 40 ft. away from it at other portions of the project, making its design and construction especially challenging.

New York City's historic Cathedral of St. John the Divine is the fourth largest Christian church in the world and a Manhattan landmark that. A new housing project known as Enclave at the Cathedral is being built right next to the church and includes two new 15-story apartment towers that will add 430 new residences to the neighborhood. The apartments actually touch the charts at one point and are located just 40 feet away from it at other portions of the project, making its design and construction especially challenging.

The project, being developed by The Brodsky Organization, was divided into two towers to allow for views of and access to the cathedral. The façade is composed of a series of architectural concrete columns and different shaped cast-in-place structural concrete ribs, derived from the transformation of the cathedral’s buttresses.

In addition to the limited space due to the project’s proximity to the historic cathedral, crews faced multiple other significant logistical challenges. The construction site is located directly across the street from Mount Sinai St. Luke’s emergency room entrance, thus access and vehicle traffic were extremely restricted and crane placement was not an option.

For these reasons, Casino decided the best strategy for concrete placement was to invest in three new Putzmeister RS 850 Tubular Column Placing Systems and three new Putzmeister placing booms, including two MX 24/28Z’s and a MX 28/32Z. They also utilized a VS 100 HP Truck-Mounted Line Pump, which was owned by SNA Concrete Pumping Corp.

“We needed to come up with a concrete placing solution that minimized any congestion at ground level,” explained Bill Charon, president of Casino. “Utilizing the tower placing systems allowed us to access the entire site, while essentially containing all the equipment within the confines of the project footprint.”

Two of the placing systems were located on one of the apartment towers, while the third was located on the second tower. The pump drove concrete up through the tower placing systems to the booms for accurate and efficient placement. The crew was able to easily switch the flow of concrete between the towers using a Putzmeister DVH 5/2 Hydraulic Diversion Valve.

Putzmeister’s new RS 850 tower placing system features a fully automatic self-climbing system, and easy-to-assemble, compact design for high-rise pumping. Its M-profile design incorporates the climbing and delivery systems into a small, square footprint — one meter by one meter — so it is easier to create and repair the holes the system travels through during construction. The towers easily climbed the 460 feet to reach the top of the building, helping to place the 17,000 cubic yards of concrete required for the job.

“We were extremely pleased with how the towers performed,” added Charon. “They were able to jump vertically with very little effort.”

Due to the proximity of the beautiful, gothic-style cathedral, the design of the Enclave project incorporated intricate architectural details, including uniquely shaped concrete columns. The design of the architectural columns and shear walls required that their concrete had no drop height at all. Thus, a tremie-style placing system was used to eliminate the free fall of concrete and the risk of separation of aggregate from the concrete.

“Utilizing the placing booms, we were able to keep the lower end of the pipe immersed in fresh concrete, as was required by the design of this structure,” said Charon. “This tremie method would have been very difficult to achieve without using Putzmeister’s placing system.”

“Putzmeister placing systems were integral in how we placed the concrete for this project,” added Conners. “The system was efficient, cost effective, and helped us achieve our schedule.”

The Enclave development was uniquely designed to bring residents together, with an abundance of amenity space inside and outside both towers. The western tower will showcase studio, one- and two-bedroom residences and the eastern tower will have one- and two-bedroom residences. Each home will be equipped with cohesive appliances, custom cabinetry, wood flooring and modern fixtures to provide residents with special meditative spaces. The towers were topped out in Spring 2015 and the project is expected for completion at the end of 2015.