Adding a Ramp to a Parking Deck

The contractor was chosen for the project based their careful workmanship and attention to detail. 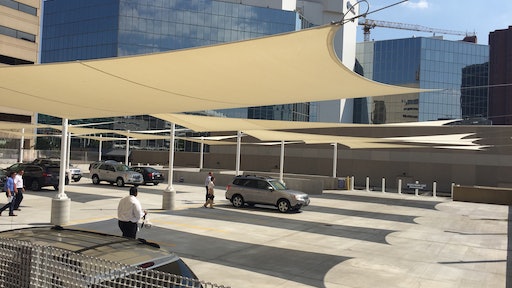 The Bartley Corporation based in Ashton, Maryland focuses primarily on concrete foundations, commercial building slabs, and they have occasionally constructed concrete houses. So they were a little surprised when a general contractor they had worked with in the past contacted them about doing a rehab project for a parking ramp located in a congested part of downtown Baltimore. Andrew Bartley, the company’s executive vice president, said the GC wanted them to do the work because they liked their careful workmanship and attention to detail. After looking carefully at the project at first in doubt,  Bartley decided they could do the work and proceeded to estimate the job. It ended up becoming more of a negotiated bid then a competitive bid.

The One E Pratt Street Garage was built several years ago and the entire top deck level was designed as an atrium patio for people use rather than for vehicles. But over the years there was increased need for parking spaces and the owners decided it was time to adapt the facility. This involved removing some of the top deck to construct a car ramp, adding support walls to the side of the new ramp, constructing a support beam, constructing a large planter on the top deck to separate parking spaces from people leisure space, and placing a 3.5-inch concrete topping in the new parking area. In addition, several columns had to be strengthened and engineers identified many locations that required shoring during construction. Challenges also included keeping the parking facility open for business at all times.

Creating the opening for the ramp and other demolition was completed by another contractor before Bartley started their contract. After mobilizing for the project the first task was to install shoring in locations decided upon by Rathgeber/Goss Associates, the engineer for the project. The next task was to further strengthen the columns located near the new ramp. Then a wall under one side of the ramp was formed and cast to help support the new ramp. Much of this wall was formed on one side only, the other side was backed up against a deck and concrete beam wall. After the new ramp was formed and cast the wall was continued above the ramp to the deck above. With the completion of this wall Bartley formed and cast a large beam to tie the top deck to the new wall for added support.

A separate contractor removed the existing unit pavers over the new 46 car parking area and installed a waterproofing vapor barrier. Bartley then installed a 3.5-inch concrete topping over the membrane.

The last step for Bartley was the construction of the concrete planter separating the new parking area from the remaining terrace where people can gather to eat their lunches or relax.

Bartley says the project posed a number of challenges for them. These included flexing in the deck floors of the ramp, a congested work area, continued use of the facility during construction, heavy traffic around the site, and little space for construction equipment.

When the original parking facility was constructed “Double T’s” were used to construct the floors of the ramp and all floor levels had considerable flex, Bartley thinks as much as one and one-half inches caused by the weight of moving vehicles. Bartley was concerned this would cause problems where their formwork came into contact with the decks. But this was partly mitigated by the engineer requirement for shoring as the first step in the construction process. It reduced movement in the structure and helped to support the top deck after the opening was created for the ramp. But there was still some movement where the lower wall met the new ramp and where the walls above the ramp came into contact with the floor above. Bartley adds that the small amount of damage that resulted from this movement wasn’t structural and the owner permitted cosmetic patching in those places. They also used “stay forms” (forms that stay in place) where the new ramp met the Double-T’s on the top deck—a location that was difficult to remove forms after concrete was placed.  It also served as an isolation joint that limited deck movement from reaching the freshly placed concrete.

The congestion of the site, the heavy traffic in the area, and the fact that the parking ramp had to remain open during the construction was also a big challenge. The ramp is located in a busy part of the city and this lengthened ready-mix and other material delivery times. There was limited space for construction trucks, cranes, and concrete pumping trucks to work on site and often times trucks had to take turns for spots when they were needed. These spaces had to be shared with other trades working on site too. No construction vehicles could park inside the ramp due to customer use but Bartley said they could use one of their pick-up trucks to bring tools and materials to their work areas. Most materials however were lifted to work areas in boxes lifted by a crane. Weather was in issue too. On one hot summer day “hot concrete” plugged the concrete pump and the crew had to completely clear the pump and clean the line.

How it turned out

The general contractor chose Bartley because they had faith in the company—that they would perform the careful work that was needed, even though it wasn’t the type of work that Bartley specialized in. The construction went well and the owners were happy with the result. The ramp and walls turned out well, the waterproofing and the 3.5-inch concrete topping went without a hitch, and the patching and rubbed finish on the new work made the new work seem like it had always been there and the ramp now serves more customers