Mass Concrete Placement: How to Use Temperature Monitoring to Meet a Required Specification

Maintaining appropriate temperatures and temperature ranges within mass concrete is a key to maintaining its durability and longevity. 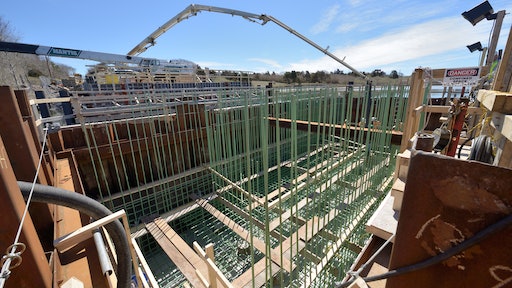 What is considered mass concrete?

The American Concrete Institute (ACI) offers a simple definition of mass concrete. According to ACI 116R, mass concrete is “any volume of concrete with dimensions large enough to require that measures be taken to cope with generation of heat from hydration of the cement and attendant volume change, to minimize cracking.”

How large is large enough?

Keep in mind that this specification refers to dimension only. The content of the cementitious mixture used in the mass concrete will also have an impact on the concrete temperatures within those placements.

Common examples of structures often categorized as mass placements of concrete include:

Why is mass concrete temperature monitoring so important?

Mass placement temperature monitoring ensures you stay within specifications and reduces the risk of concrete developing severe cracking that could result in costly repairs or reconstruction.

Heat generation occurs as the cementitious material in a concrete mixture hydrates—the majority of heat is generated in the first days following placement. This heat is the highest at the center of the structure and dissipates out through the sides of the structure as it tries to reach an equilibrium temperature with the ambient conditions around it.  In mass placements, because there is so much concrete being placed at once and hydrating, a lot of heat is generated and released, creating two primary concerns:

2.    Exceeding a maximum temperature differential between the hotter and cooler part of the element.

Because heat dissipates more slowly in thicker placements than thinner ones, mass placements can get very hot. When internal concrete temperatures get high, there is an increased potential for Delayed Ettringite Formation (DEF). DEF is a materials-related issue that can lead to severe cracking.  Typically, the maximum internal temperature is specified as 158°F—sometimes as high as 160°F—because the risk for DEF increases above that temperature.

How is temperature monitoring performed?

Every mass concrete project requires the contractor to monitor the temperature for several days after placement, sometimes even up to three weeks or longer. The temperature monitoring procedure that a contractor intends to follow usually must be described in a thermal control plan. The design calculations used in the plan must conform to the governing agency’s specifications and must be developed and approved in advance of construction.

Modern sensor technology offers users the ability to define the desired time intervals for acquiring sensor data. Once acquired, the data can be downloaded into software or a mobile app and used to generate reports of temperature history and temperature differential data for easy disbursement.

Failure to properly monitor the temperature of mass placements during the heat dissipation phase can result in the mass concrete element being rejected. Rejected concrete elements usually must be removed at the contractor’s expense.

Other benefits of temperature monitoring

In addition to meeting mass placement specifications, there are other ways that monitoring temperatures in general can be beneficial. This data can also be used for:

Minimizing the risk of temperature-related damage is a fundamental part of every mass placement project. There are two main temperature-related issues to monitor for: maximum internal temperature and temperature differential. Exceeding specified limits puts concrete at increased risk of severe cracking. Thermal control plans describe the temperature monitoring procedures that a contractor intends to follow.

COMMAND Center is a system developed specifically for monitoring internal concrete temperatures and estimating concrete strength by the maturity method.  COMMAND Center sensors are the most affordable self-logging sensors available for this purpose, and greatly simplify the process.  COMMAND Center offers free software for viewing and analyzing data, and both wired and wireless data retrieval options that are suitable for any mass placement project. Get started with hassle-free temperature monitoring today at: www.COMMANDCenterConcrete.com.

When repairing and/or restoring cracks, chips, spalling or flaking in concrete driveways, patios, or sidewalks - before you bring in a big crew and ready-mix trucks to remove and replace the concrete, consider resurfacing it instead.
Ojas Arun Chaudhari, Ph.D.
June 30, 2021
Follow Us