CFA Grand Project of the Year: A Lesson in Perseverance

Concrete Foundations Association announces its 2019 Grand Project of the Year. 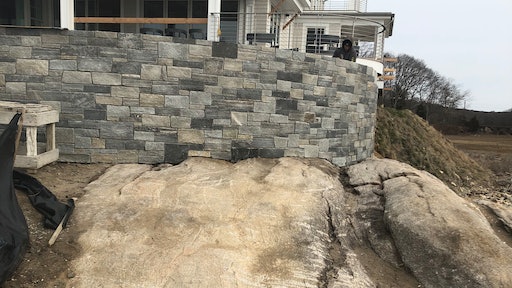 The finished patio landscape wall with stone veneer sits at the edge of the water, sharing a stone and traditional footing for bearing.
Talpey Construction and the Concrete Foundations Association

Wall Thickness: All 10-in. walls

You’ve heard it said a thousand times, “If at first you don’t succeed, try and try again.” In the concrete construction industry, however, this might have several different connotations and, perhaps, be met with a certain amount of skepticism. Realistically, contractors know you get one shot with concrete to get it right. If not, it is a whole lot more expensive to make it right. That is unless you are considering the act and, for some, the art of introducing your work to broader audiences and challenging your skills to be recognized by national award programs.

The project selected as the Concrete Foundations Association's (CFA) Grand Project of the Year found this to be true. In 2018, Russ Talpey, president of Talpey Construction of Westbrook, Conn., submitted a house foundation for the annual competition. While it was not selected for recognition, Talpey continued to work on that same house, landing CFA's highest honor this year with a stone wall complex at the property.

“We like to participate to give our employees recognition for all the hard work that goes into a part of the job that is virtually always overlooked,” states Talpey. “We put as much effort as we can into every job we do, but some are just on another level of complexity that should be acknowledged.” The 2019 Projects of the Year will be fully unveiled by the CFA at its annual conference July 25-27, at the Hilton Denver City Center in Denver, Colo. CFA is a membership organization created by concrete contractors in 1974 to establish a network for sharing experiences and best practices, as well as advocacy for the industry. With membership in 35 U.S. states and three Canadian provinces, CFA serves the membership with work in building codes, government regulations and more. Each year, the association challenges its contractor members to identify projects they feel carry the signature of their best work, most difficult challenge or most satisfying accomplishment. These projects are submitted with data on their physical traits as well as photos of the construction and completed work. Some contractors have even begun providing drone and other video sources to demonstrate the larger context of the work completed.

“You would think that once you have seen one concrete foundation, you have seen them all,” says CFA Executive Director James Baty, F.ACI. “Yet, each year we continue to find compelling stories of extreme challenges faced by these professional concrete contractors and completed works that demonstrate the true expertise one can find in this industry.”

CFA convenes a panel of judges representing professional contracting expertise, design, publishing, marketing and industry recognition to evaluate projects based on categories of construction quality, project complexity for its scope, challenges faced, display of technology/resources and setting industry standards. Through this evaluation process, projects from a broad spectrum of categories are discovered for their superiority and, eventually, a top-rated project stands out among the rest. This year, the projects ranged from an incredible multi-family apartment complex to the smallest of house foundations and, once again, projects that were installations of site concrete, ancillary to a building structure.

The foundation Talpey Construction submitted in 2018 was impressive indeed, coming in at 5,500 sq. ft., with a lot of steps, brick ledge, piers and more. When the dust settled, however, there was an unusually high number of large projects considered, and the project known as “Giant’s Neck” was not selected to be among those recognized.

As is the case on many projects in the elite size category reaching over 5,000 sq. ft., the contractor is never done when the house foundation has been completed. Talpey Construction continued the work on this residence and, in late 2018, began work on the site walls that would define and support a massive deck complex reaching down to the water’s edge overlooking Niantic Bay.

“The architect designed exposed walls that would be veneered with a thin, 2-in. stone cut from a local quarry,” says Talpey. “To achieve the vision, the stone veneer would have to go right down to the ledge [overlooking the water]. This meant the face of the footing would have to be in line with the face of the wall.” The concrete retaining wall brings guests up close and personal with the lake.Talpey Construction and the Concrete Foundations Association

As this wall took shape, the architect used a continuous radius to define the outdoor entertainment complex. Over half of the footing sets on the ledge of the outcropping and has 4 ft. of elevation change down and back.

“The feature of the deck is a built-in cook top stove that is gas powered,” continues Talpey. “It sits on an interior radius with a descending stairwell that projects from a separate radius point we had to establish.”

This continuous radius follows the ledge and, at nearly the center of the arc, the ledge falls away. This allowed a traditional footing to be used for support of the wall.

When asked about the process for this wall complex, Talpey says that it all begins and ends with the success of laying out the points. In order to achieve accuracy and determine the forming process they would use, he met with the landscape contractor on site. Together they began establishing points as they went through the plans. As they progressed, they found that as good as the plans were, the dimensions were largely to the “face of the veneer on the inside” of the radius. This is not atypical for architectural plans, which means the structural components have to be calculated. The two began calculating the points necessary for the face of the concrete, laying out points every couple of feet to ensure a smooth radius for the forming system.

“I have begun to rely fully on my Leica system,” adds Talpey. “The ‘layout line’ feature is clutch to letting me plan a point where ever I need it on a radius. Given the ledge area we were dealing with, it enabled us to get the wall supporting the stove piece all on one elevation.”

Approaching unique projects often takes creativity in the systems used to effectively deliver the results. For Talpey, their normal forming system is 1-1/8-in. latch forms, which they transport and deliver to jobsites with a boom truck and baskets. Because the location of this work was on the opposite side of the home under construction and descending toward the water’s edge, there was no access for their typical delivery. Thus, the decision was made to switch to steel-ply forms to facilitate the easier movement of forms across the jobsite. For this particular set of radius walls, the steel-ply forming system was much better suited.

They also added metal filler panels in key locations to open up the radius and prevent the wall from becoming segmented and choppy. This proved important to the landscape contractor as the thin veneer adhered to the concrete wall would have expressed the segments far more so than traditional veneer.

“This job was just fussy,” notes Talpey. “Although not a large job from a materials perspective, we had a lot of time in it. We had to make sure we executed each process correctly, or the result in the end would have been a black eye. The training we have received with the Leica system really showed itself in the quick work for the curves and adjusting the plans we were given.”

When asked about the chance to do a project like this, Talpey says that curved walls are always cool. The fact that this one was also built on a ledge with no spread footing for tolerance control and adjustments really challenged the team.

While Talpey would have preferred this part of the project was completed with the rest of the house and evaluated as a whole last year, the opportunity to revisit the uniqueness of this component and realize it as a separate project makes it all the more worthwhile to be recognized from among this year’s quality entries.

Wall Thickness: All 10-in. walls

About the CFA Projects of the Year

Established in 1998, the annual CFA Projects of the Year opens for submissions in December and closes in March. Entries are free to association members from any membership category. Recognitions are publicly unveiled during the association’s annual convention in July and published in the fall issue of Concrete Facts magazine, distributed freely to any individual active in the concrete construction industry. For more details on the awards program, visit www.cfawalls.org.