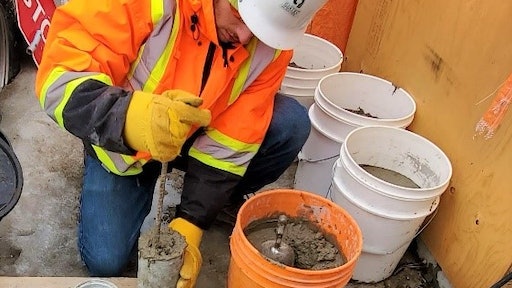 Rodding on the top layer of a concrete cylinder.
Giatec

Concrete is the most used construction material in the whole world. More than that, behind water, it’s the most used material, all categories combined. Worldwide, about 10 billion tons of concrete are produced per year. Obviously, the strength of the concrete produced varies, but in most projects, it is crucial to have an idea of this measurement.

During the last few decades of significant progress for concrete, today’s most widely used compressive strength standard emerged: the cylinder concrete break tests. It is a method that has allowed construction to prosper for so long, building the modern world that we live in. For that reason, we must all tip our hats towards this compressive strength test method.

However, it is also a method that allows for errors, which on numerous occasions can have significant safety consequences. Moreover, this is proportionally a very slow method for such a fast-paced industry, generating unnecessary costs and project extensions to general contractors.

Many errors can originate from this testing method, either giving a result that is higher or lower than the real mix design properties. In both cases, we are mostly aware of the problems causing these errors in strength values. However, there are too many variables to control for break tests to always yield perfect results. It is first necessary to understand the two types of cylinder break test methods, or rather the curing difference between standard-cured and field-cured.

The standard-cured method, or laboratory-cured method, is used for quality control of concrete. The concrete cylinders are cast onsite and brought to a third-party laboratory, where the curing temperature is set at 23 ± 2°C (73 ± 4°F) and the humidity at a minimum of 95%. On the other hand, the field curing method is used to resemble, as close as possible, the conditions of the structure. To do so, the cylinders are kept close to the structure, hoping to mimic the temperature and humidity of the in-place concrete.

In both cases, the cylinders are cast onsite, with different layering and rodding methods depending on the country and the standard test methods used. By experience, I know that casting concrete cylinder samples is a repetitive task and it is hard to always prevent human errors. There could be mistakes made with the rodding depth, the size of the layers, the lack of tampering, and so on.

Once the cylinders are cast, they will remain onsite for one to three days for the initial curing to be over. The initial curing is a major factor in strength development. The cure must be done between 16 and 27°C (60 and 81°F) for concrete with specified strength less than 40 MPa (5800 psi) and between 20 and 26°C (68 and 79°F) for those with greater strength according to ASTM C31/C31M – Standard Practice for Making and Curing Concrete Test Specimens in the Field. Also, high humidity of the samples should be maintained at all times.

Unfortunately, those measures can be often disregarded, and the initial curing is non-standard in many cases. The worst aspect is when those non-standard cures are not reported, thus making them impossible to track when low breaks happen. In the future, this may encourage unnecessarily using concrete with higher specified strength to make sure the 28-days results are within the acceptable range, often at a much higher cost. Finally, these curing errors increase the variation between strength results. This sometimes leads to higher chances of having to drill concrete cores from the structure, creating massive delays on the job site as well as generating unnecessary costs.

Then, there is the whole aspect of handling, transportation, and storage of the cylinders, which can all create micro-fractures in the concrete, resulting in a low break. After that, the laboratory technician comes into play: firstly, taking care of some handling and some storage as well, but secondly having to prepare the sample in due time for the compressive strength test. The technician must grind or cap the extremities of the cylinder. Any imperfection on the two end surfaces or any deviation of the perpendicularity of the cylinder’s axis are once again more causes of low breaks caused by a human factor.

Finally, the laboratory technician tests the cylinders in compression… hopefully with a calibrated machine. The goal is to get well-formed cones and/or vertical cracking as they are the best type at reaching the highest potential concrete strength results. Unfortunately, there is always a possibility that the concrete does not fail properly, meaning that there is only side fracture(s) present at the top or the bottom of the cylinder. This kind of fracture will not reach the strength potential of the concrete cylinder and will result in a low break. At this point, it would be very easy for the third-party laboratory to falsify the numbers if certain errors occurred and there is no way to verify that the given results are accurate. 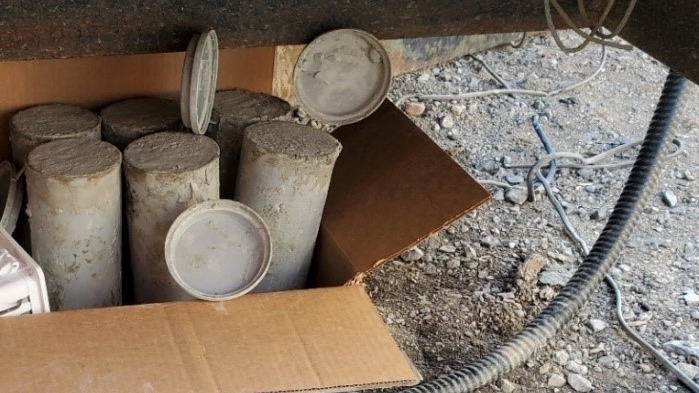 Inaccuracies of the Field-Cured Method

In the eventuality that everything went perfectly on every step of the process, in many cases it remains rather challenging to prove the results are trustworthy and representative of in-situ concrete. Field cylinders are based on the concept that cylinders kept beside the slab will be kept at a temperature and humidity approximating those of the slab. This is rarely the case, as the exothermic nature of cement hydration in large structural elements typically leads to a heat rise that is much more significant compared to that for cylindrical elements with large surface area to volume ratio.

Obviously, the same mix, evolving at different temperatures, will gain strength at a very different pace. Overall, this method can’t always be trusted, as the cylinder and the slab will almost never gain strength at the same rate. Here is a quick summary of the many possible aspects where errors can be encountered:

Still not convinced that this method isn’t optimal?

What about the long delays to get the results from the laboratory? What if you knew of a way to overlook all these issues, to get data on your concrete at any time and ignore all the hassle coming from cylinder testing? Sounds magical, but it is now becoming reality with concrete maturity testing.

With wireless maturity sensors in your concrete, like SmartRock, all this becomes possible. By using the often-overlooked concrete maturity principle, it is now possible to get real-time data, as well as records of temperature, maturity, and strength of your concrete. With this method, it is known precisely when a certain concrete mix reaches a desired strength.

This allows for several new possibilities.

All that is needed is the concrete mix information from your supplier and a device that has wireless connection. After making the switch to the incredible SmartRock technology, your concrete will only need the 28 day standard-cure compression strength cylinders for acceptance purposes and mix validation. Forget about the hassle of field-cure cylinders and all the disadvantages they bring, join the new way of concrete testing with SmartRock.