Results of a Southern California freeway survey that set out to determine the short-term and long-term performance of rapid strength concrete for the potential repair and restoration of highway infrastructure work. 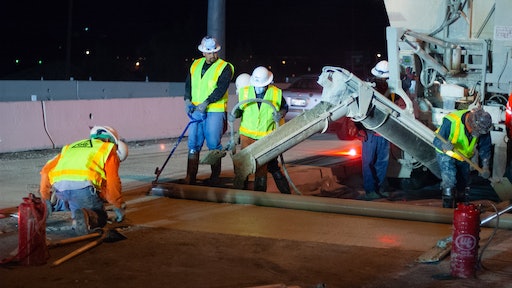 Deteriorating highway and other infrastructure conditions across the U.S., combined with widespread funding shortfalls, make it clear that there is a need for cost-effective, long-term solutions for roadway preservation. Surveys of existing projects in California have addressed this need, with results documenting pavement restoration successes and offering guidance on the practice of pavement management.

The use of rapid strength concrete (RSC) for roadway construction is extremely beneficial for today’s congested highways and the traveling public. Because RSC reaches opening strength in a matter of hours, slab replacement can be accomplished overnight. The California Department of Transportation (Caltrans) has used RSC for pavement repair since the 1990s and is typically able to complete slab replacement—including removal of cracked slabs, repair of the base course, placing of dowel bars and interlayer, and placing and curing of RSC—within a six-hour window. Lanes are typically closed at 11:00 PM and open to traffic again by 5:00 AM.

A total of 3,562 rapid strength concrete slabs, located across 18 inner and outer traffic lanes on 12 major freeways that were two- to five lanes in each direction were surveyed.

Two separate surveys were conducted in the past two decades, the first by Caltrans in 2008, the second in 2018-20 by myself. These surveys sought to confirm that in addition to offering the immediate benefit of short lane closures, RSC was providing durable, long-lasting repairs. Condition surveys conducted for “Evaluation of Rapid Strength Concrete Slab Repairs” (Bhattacharya, Zola, and Rawool, 2008) examined 15 freeway projects across six regions, looking at more than 5,000 “individual” RSC slabs and recording all distress. Since the slabs were only three years old at the time of the survey, the study’s goal was to document the short-term performance of RSC. Results showed that only 1.4% of the RSC slabs surveyed showed any premature distresses. By 2018, the time was right to assess longer-term performance. The evaluation focused on two California strategies for restoration of jointed plain concrete pavement (JPCP):

For the six ISR-RSC “individual” replacement projects being assessed, cracked, or badly damaged JPCP slabs had been removed and replaced with RSC slabs along a traffic lane. RSC slab thickness (typically 8 to 9 in.) and joint spacing (typically 12-19 ft.) remained the same and existing base courses had been largely left in place. In some cases, dowels had been included in the transverse joints. Neither shrinkage nor ASR requirements were specified at the time of slab replacement.

For the six JPCP-RSC “lane replacement” projects being assessed, all slabs and base courses along one or more traffic lanes had been removed and replaced with RSC. Slab thickness was typically increased during reconstruction to be 10-to-14 in.; perpendicular joint spacing was uniform at 14 ft.; and dowels were placed at all transverse joints. Both RSC shrinkage and ASR requirements were included in these specifications.

A survey team, working with Caltrans, randomly selected six of the 15 projects previously surveyed in 2008 (all ISR-RSC) to be part of a similar 2018 study. Located in southern Calif., the now 13-year-old RSC slabs had experienced on average truck traffic levels of 6 million total trucks in the inner lane and 20 million total trucks in the outer lane. A total of 1,493 ISR-RSC slabs were surveyed.

An additional six projects were randomly selected to represent JPCP-RSC “lane replacement” pavements. Because only panels located in outer lanes with heavy truck traffic (16 million trucks total) had been replaced, only JPCP-RSC slabs in outer lanes were included in the survey. These RSC slabs, which numbered 2,069, had been in service from nine to 17 years.

A total of 3,562 RSC slabs, located across 18 inner and outer traffic lanes on 12 major freeways that were two- to five lanes in each direction were surveyed. Recent Caltrans and Google Maps videos of traffic lanes were used to survey types of distress and the percentage of slabs affected. On-site field observations were made of five of the projects to confirm the accuracy of data collected using the videos. Distresses examined included transverse cracking, longitudinal cracking, corner cracking, joint spalling, shrinkage cracking, surface defects, joint faulting observations, and pumping/erosion. 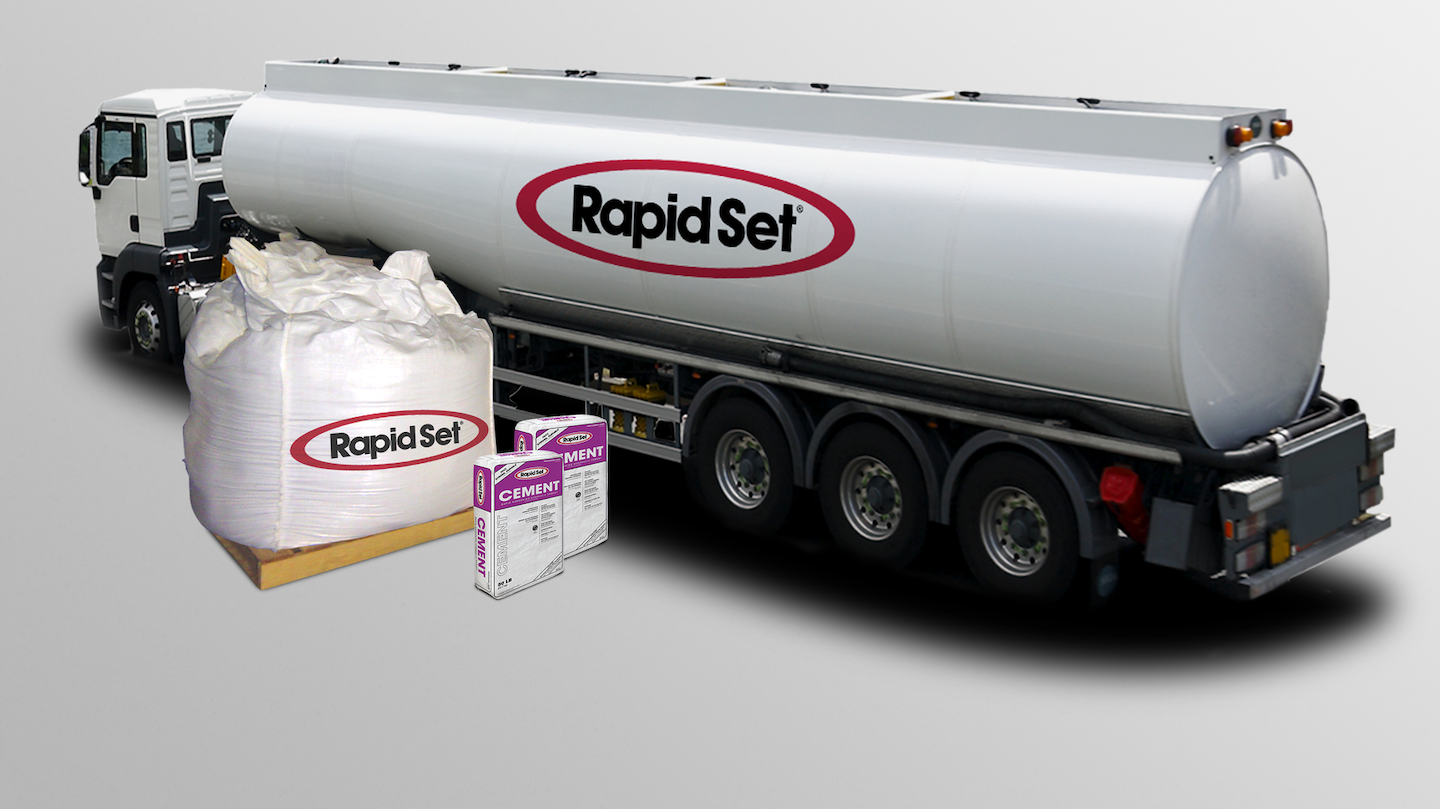 CTS Rapid Set cement allows contractors to complete projects in a fraction of the time required with typical cement.CTS CementRapid Set® Cement, manufactured by CTS Cement, was used for the majority of the original slab replacements. Rapid Set® cement is a non-proprietary belitic calcium sulfoaluminate cement that reaches opening strength (400 psi flex) in 1.5 hours. It is very low shrinkage and is resistant to sulfate attack and alkali-silica reaction (ASR). Rapid Set® cement can be used in a volumetric mixer or ready mixer. For a few projects, the 4x4 Concrete System was used. This proprietary system, originally patented by BASF and now offered by multiple admixture suppliers, offers opening strength (400 psi flex) in four hours but can experience higher shrinkage than Rapid Set® cement if a high dosage of shrinkage-reducing admixture (SRA) is not used. It cannot be used in volumetric mixers and is appropriate for ready-mix delivery only.

ISR-RSC survey results for the “individual” slab replacements of six projects were consistent with findings from 10 years prior (2008): very low distress development, with one exception. Of the slabs in the outer lane, 20% had developed transverse fatigue cracks—the only significant cracking experienced across all 12 projects. Transverse cracks are the commonly seen top-down fatigue cracks caused by heavy trucks moving over the upward curled slabs and applying axle loads that cause high tensile stress in the top of the saucer-shaped slab caused by moisture and temperature gradients. Transverse fatigue cracks were predominantly located in the roadways’ outer lanes, where truck traffic was heaviest. Inner lanes were found to crack at a rate of only 3%, even though they carried 6 million trucks, whereas the outer lanes developed 21% carrying 16 million trucks. The survey showed only minor occurrences (<1.1% RSC slabs) of longitudinal cracking, corner cracking, joint spalling, and shrinkage cracks). Very little pumping or joint faulting was observed.

JPCP-RSC survey results for “lane replacement” of six projects were consistent with the ISR-RSC projects for all distress types (very low development of any distress, less than 1%). The major difference is that transverse fatigue cracking was only 0.3% for JPCP-RSC rather than 21% for ISR-RSC in the outer heavy truck lanes. For example, one JPCP-RSC project, I-10 in Riverside, California, had the outer lanes replaced in 2003, using 11-in.-thick slabs, 14-ft. joint spacing, and dowels at all joints. The survey showed excellent performance of the RSC with no significant cracking of any type having taken place over 17 years.

Concrete durability issues, typically seen as surface cracks and scaling, were almost non-existent. There was no significant difference in cracking or durability performance between CTS Rapid Set® cement concrete and the 4x4 system. The survey team did note, however, that construction quality is a very important consideration because, historically, durability issues have been associated with construction variation and material durability issues. 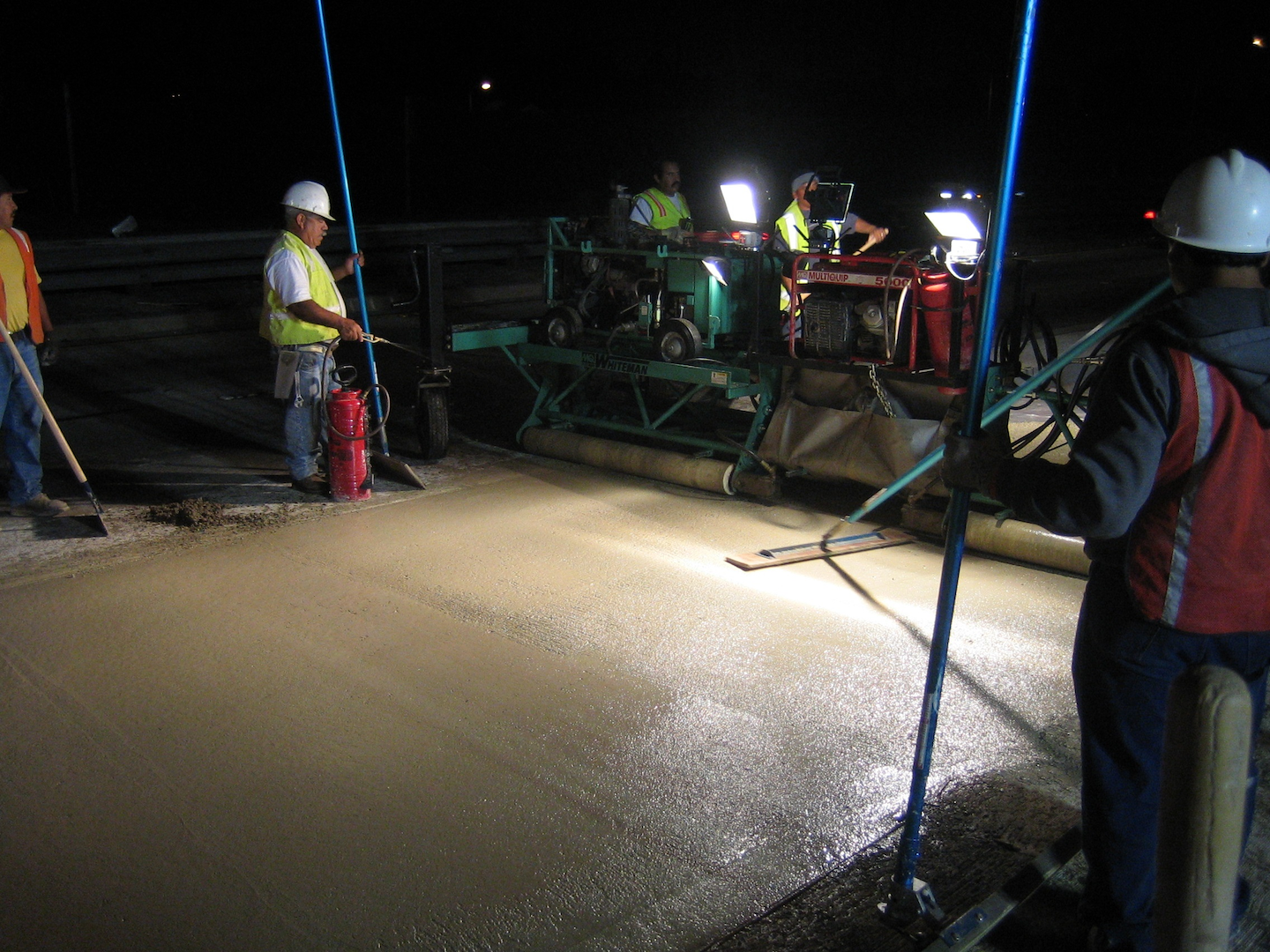 Based on Survey Findings

It is estimated that outer lane ISR-RSC individual, thin slabs have service lives of 10-to-13 years and inner lanes with less truck traffic in the order of 15-20 years with the same thin slabs. The individual slab replacement appears to be a viable repair solution for lower truck traffic inner lanes, or as a short-term strategy for outer lanes. Dowel bar use at all transverse joints is recommended to prevent pumping and faulting. Replacement of the entire lane, using a closer joint spacing of 14 ft. and thicker slabs, as well as installing dowel bars at all transverse joints and providing a new base, is considered to be the most long-lived reconstruction solution. Using these construction guidelines, appropriately designed RSC pavements should achieve at least 30 years of service (based on the limited distress seen in lane replacement RSC slabs at the approximately 17-year mark). Inner lanes that experience less truck traffic are expected to last at least thirty years. Diamond grinding should be performed to achieve pavement smoothness after RSC slab replacement as needed.

“With the increasing demand that highway work be completed overnight in order to minimize impact on the traveling public and decrease emissions from traffic congestion, it’s great to receive validation that pavement management with rapid strength concrete is a long term solution for our nationwide highway infrastructure,” says Ken Vallens, President and CEO of CTS Cement Manufacturing Corporation.

To date, Caltrans has not specified durability criteria for shrinkage and ASR for slab replacement work, because it has typically been considered a short-term (approximately five-year) solution. However, with survey results showing that slab replacement using RSC can be a long-term pavement reconstruction option, it is the belief of the survey team that durability criteria should now be included.

This content is adapted from a Dec. 2020 International Grooving and Grinding Technical Session:

Mike Darter is a Professor Emeritus of Civil & Environmental Engineering, University of Illinois.