J.P. Cullen & Sons focused on equipment and planning to complete the concrete slab for a high school gymnasium floor. 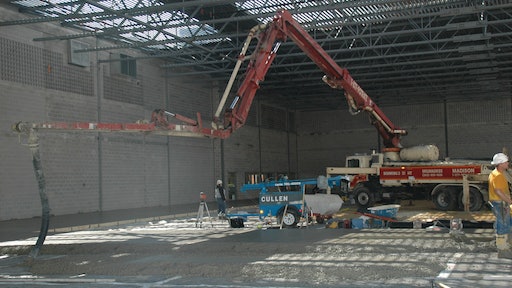 With the use of a boom pump and proper planning, J.P. Cullen & Sons was able to complete a 32,000-sq.-ft. gymnasium floor six months ahead of schedule.

Large concrete floor pours can present many challenges, especially if you have to work within walls and a roof. Careful planning, precise execution and the right equipment helped J.P. Cullen & Sons, Janesville, Wis., complete a 32,000-square-foot gymnasium floor for Janesville Craig High School.

This project required J.P. Cullen to place 323 yards of concrete while school was in progress. They decided to start the pour at 4:00 a.m. to eliminate traffic congestion between the school traffic and construction vehicles. The staging area was also set up next to the gym to eliminate inconveniences for the school and students.

The early start allowed J.P. Cullen to complete the floor in one day. "A one-day pour eliminates multiple set-up times that would have been required with several pours," says Dan Swanson of J.P. Cullen & Sons. The result was both cost and schedule savings.

To keep the job moving at a constant pace, nine concrete trucks were always ready so the crew was always busy. J.P. Cullen & Sons worked with LYCON Inc., the ready-mix producer, to ensure that trucks rotated about every 10 minutes.

Another key aspect of the project was the use of a Schwing 31 HT pump truck. The pump truck was small enough to unfold inside the gym which allowed J.P. Cullen to pour the perimeter of the floor while leaving the truck in the middle of the gym. "Ready-mix trucks would not have been able to reach because of the distance from the recessed slab to the exterior edges," says Zach Miller of J.P. Cullen. "The pump allows the crew to lay the concrete where they choose and also allows for two trucks to be set at the hopper, cutting down the time between trucks."

When pumping indoors, Miller says the biggest safety concern is carbon monoxide from the pump truck's exhaust. To eliminate this issue, J.P. Cullen monitored the carbon monoxide level and also added barn fans to all the gymnasium openings. Another concern is working close to the gymnasium ceiling. Too large of a boom or not paying attention to overhead clearance could result in damage to the ceiling and the boom.

Gymnasium floors require special considerations when pouring the concrete. For example, concrete tolerances must be very specific. "Per spec, the tolerance at the wood and rubber flooring is 1/8 inch in a 10-foot radius in lieu of the typical ASTM E 1155 that may be specified," Miller points out.

Because the floor had to be recessed, J.P. Cullen poured the floor in two slabs. The PNA Diamond Dowel System was added at the recessed slab to reduce cracking when the two separate slabs move, Miller says.

Control joints were not necessary for this floor because the company used Propex Novomesh 950 fiber reinforcement in the concrete mix. But J.P. Cullen and LYCON did conduct a pre-install meeting where they anticipated where the floor might crack and added additional rebar to these locations, Miller says.

After placing the concrete, crew members used a MBW ScreeDemon vibrating screed and hand trowels. It was then finished with a bull float and Whiteman ride-on trowels. Five passes with the ride-on trowels and pan blades was the first step. "Each pass goes one way and then in a perpendicular direction," says Miller. "The last two passes are with combination blades. The concrete is then wet cured for seven to 10 days."

J.P. Cullen was contracted for an identical pour at a neighboring high school, and to make sure they had the process as streamlined as possible, one crew member video taped the Craig High School pour. Videoing the entire process allowed them to review the job, see what improvements could be made and ensure that efficiency was even further improved on the next project. For the second pour, a laser screed was used. "The video allowed us to compare the accuracy of the crew versus the laser screed and see that our crew in fact had worked efficiently and accurately," Miller says.