When it comes to selecting a concrete power trowel for your rental inventory, there are several factors to consider. 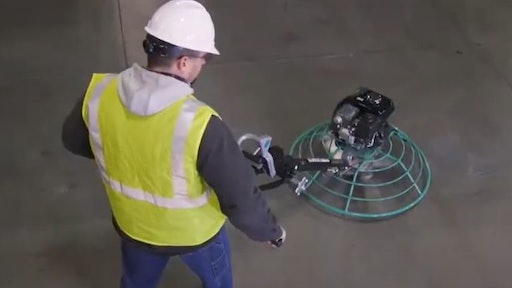 Power trowels are designed to flatten concrete, which is achieved by processes known as floating and finishing. This usually happens in two steps.

First the power trowels are used to 'float' the wet concrete. Floating removes the humps and fills the valleys while at the same time compacting the concrete (bringing the cement-rich 'cream' to the top in preparation for the finishing step).

The second step is to 'finish' the slab, which creates a smooth hard skin on the concrete slab by burnishing the top surface. In the second pass, often called 'crossover floating,' the contractor operates the trowel in a direction perpendicular to the first pass. This further levels the concrete slab and produces a hard, smooth and dense surface. Trowels also close and seal pores in a slab.

Trowels are used by concrete and general contractors in various residential, commercial and industrial applications, covering everything from basements and parking lots to grocery store and warehouse floors.

According to Jonathan Cuppett with Multiquip, many contractors start out small with walk-behind trowels but as their client base builds, so do the jobs, both in number and size, requiring the move to larger ride-on trowels.

"Walk-behind power trowels are typically used on jobs smaller than 5,000 square feet, particularly those where the contractor is working in a space-restricted area," says Cuppett. "Walk-behind trowels range from 24 to 48 inches in diameter, making them well suited to flattening concrete through doors and around pipes, columns and other obstacles.

"For the larger jobs — greater than 5,000 square feet — it's much more efficient to use a ride-on trowel," he continues. "These models are more powerful, travel faster and feature greater path widths, enabling contractors to reduce the number of workers they have on the job while finishing the job in less time and ultimately improving the bottom line."

Ride-on trowels have dual counter-rotating rotors ("helicopters") with typically four or five blades on each rotor. They are classified as either an overlapping blade set or non-overlapping blade set. They can be powered by either gas or diesel engines.

As mentioned, ride-on trowels are typically used on large slab surfaces (areas over 5,000 square feet). "Ride-on trowels can be as much as four or five times faster than a walk-behind trowel," says Michael Orzechowski, PE, engineering manager with Equipment Development Co. (EDCO) and vice chairman of the Association of Equipment Manufacturers/Trowel Machine Manufacturers Bureau. "They usually have more contact pressure on each blade and have more horsepower turning the rotors, thus they can create a tighter packed skin on the concrete slab over the lighter walk-behind models."

Ride-ons are offered in both hydraulic and mechanical models. "Hydraulic models eliminate many common wear items such as gearboxes, clutches and belts," says Cuppett. "Mechanical ride-on trowels, in addition to being less expensive, typically deliver more torque to the trowel blades."

Walk-behind trowels have a single rotor ("helicopter") with sometimes three, but usually four, blades on the rotor. They are typically powered with either electric motors or gasoline engines and range in size from 24 to 48 inches in diameter.

"Walk-behinds are much more affordable, portable and can be used in tighter and smaller spaces, such as residential floors, basements and small commercial jobs," says Orzechowski. "Portability is important in getting the trowel to and from the jobsite, as well as on and off the slab."

On some jobsites, site access might limit the contractor to using multiple walk-behind trowels instead of a single ride-on unit. It's really not uncommon, however, to see both types of trowels used on the same job, says Tim Lickel, concrete product manager with Wacker Corp.

"Walk-behinds can get into tight spaces while the ride-ons work in the wide open spaces," he explains. "A ride-on trowel is designed to edge along a wall line, but when it comes to finishing around obstructions, such as floor electrical and plumbing stubs, a walk-behind is good to have on hand."

When it comes to selecting a concrete power trowel for your rental inventory, life cycle costs, serviceability, safety and factory support are all key. Having the right type and amount of trowels available is another consideration.

"Contractors want a selection of trowels to be able to rent a unit that best fits the needs of the jobsite conditions they're faced with," says Orzechowski. "A lot of small contractors own a trowel but still need to periodically rent one with different features to meet the needs of the job."

The reasons contractors rent vary. For example, the size of the job might require more than one walk-behind unit; they might not have great access to the jobsite, so they'll need a walk-behind instead of a ride-on; or they need an electric trowel (with no exhaust emissions) for some indoor refurbishing work.

Rental businesses do most of their business in walk-behind trowels, says Cuppett. "A rental business should look for units that offer features most appealing to a wide variety of general and concrete contractors," he says. "For example, rental businesses should carry a range of models with various ring diameters and engine options."

Safety features on the units are always important in the rental industry. "Make sure the trowel meets or exceeds industry safety standards," says Lickel. "This is important for rental businesses because you might not know the level of experience the customer has with the machine."

According to sources, there are several questions that need to be asked when purchasing a power trowel for your inventory:

Orzechowski says sometimes less is more. "Choosing a trowel should not be based on just the purchase price and the bells and whistles," he says, "but rather the decision should take into consideration safety features, your rental customers true needs and the other costs associated with equipment, such as repair and maintenance costs. Sometimes the simplest trowel with minimum features can be the best one for the rental market. It requires less training, has less things to break and is less complicated to repair and maintain."